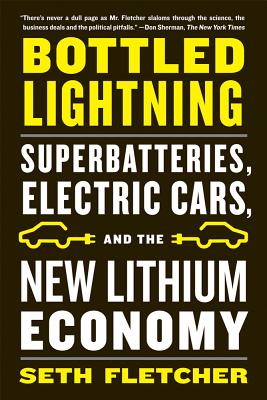 Lithium batteries may hold the key to an environmentally sustainable, oil-independent future. From electric cars to a "smart" power grid that can actually store electricity, letting us harness the powers of the sun and the wind and use them when we need them, lithium—a metal half as dense as water, found primarily in some of the most uninhabitable places on earth—has the potential to set us on a path toward a low-carbon energy economy.

In Bottled Lightning, Seth Fletcher takes us on a fascinating journey, from the salt flats of Bolivia to the labs of MIT and Stanford, from the turmoil at GM to cutting-edge lithium-ion battery start-ups, introducing us to the key players and ideas in an industry with the power to reshape the world. Lithium is the thread that ties together many crucial stories of our time: the environmental movement; the American auto industry, staking its revival on the electrification of cars and trucks; the struggle between first-world countries in need of natural resources and the impoverished countries where those resources are found; and the overwhelming popularity of the portable, Internet-connected gadgets that are changing the way we communicate. With nearly limitless possibilities, the promise of lithium offers new hope to a foundering American economy desperately searching for a green-tech boom to revive it.

“Fletcher makes a good case that the electric-car trend may soon be able to shed its dubious reputation as a public-private hybrid and roll under its own power.” —Ronald Bailey, The Wall Street Journal

“There's never a dull page as Mr. Fletcher slaloms through the science, the business deals and the political pitfalls.” —Don Sherman, The New York Times

“Bottled Lightning is a gripping introduction to this sophisticated technology and its place in our society.” —Bruno Scrosati, Nature

“A well-written, smart and--when Fletcher gets rolling in the last quarter of the book--rollicking story.” —Steve LeVine, Foreign Policy

“[Fletcher] follows lithium from the South American salt flats where most lithium minerals are mined to the labs of General Motors, tracing its journey from obscure metal to one of the most sought-after resources on earth--and perhaps the centerpiece of the automotive future.” —Discover

“Balances science and history with a closeup look at business practices and priorities, providing lucid and thorough coverage of a timely topic.” —Publishers Weekly

“Bottled Lightning jumpstarts the electric-car story with one of the key players of the story--batteries--and does it brilliantly. The more you know, the more you're ready.” —Chris Paine, director, Revenge of the Electric Car and Who Killed the Electric Car?

“To move from our present energy predicament the most vexing challenge is transportation--in short, to find a convenient, safe, portable energy source that packs as much energy per kilogram as does gasoline. Electric batteries have tantalized car builders since the 19th century, but still they seem to be just down the road a bit. In Bottled Lightning, Seth Fletcher enlists chemists, geologists, business investors, and automotive engineers to tell an engrossing and important story of how we got to where we are. This book can help us get to where we need to go.” —Rush Holt, U.S. House of Representatives

“An engaging read detailing the intrigue surrounding the birth and development of modern lithium-ion batteries. Fletcher intersperses the story of the science, business and politics of batteries with colorful quotes from some of the eminent personalities in the field.” —Gerbrand Ceder, professor of materials science and engineering, Massachusetts Institute of Technology

Seth Fletcher is a senior editor at Popular Science magazine. His writing has also appeared in Men’s Journal, Outside, Salon, and other publications. He is the author of Bottled Lightning. He lives in Brooklyn.
Loading...
or support indie stores by buying on