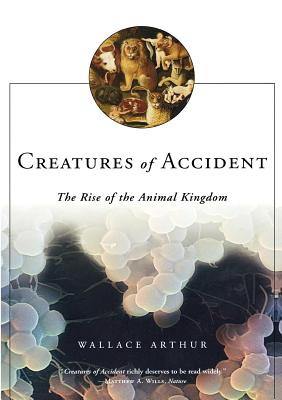 The Rise of the Animal Kingdom

The most important aspect of evolution, from a philosophical viewpoint, is the rise of complex, advanced creatures from simple, primitive ones. This "vertical" dimension of evolution has been downplayed in both the specialist and popular literature on evolution, in large part because it was in the past associated with unsavory political views. The avoidance of evolution's vertical dimension has, however, left evolutionary biology open to the perception, from outside, that it deals merely with the diversification of rather similar creatures, all at the same level of "advancedness" from a common ancestor—for example, the classic case studies of finches with different beaks or moths of different colors.

The latest incarnation of creationism, dubbed intelligent design (or ID), has taken advantage of this situation. It portrays an evolutionary process that is constantly guided—especially in its upward direction—by the hand of an unseen Creator, who is able to ensure that it ends up producing humans. Creatures of Accident attacks the antiscience ID worldview, mainly by building a persuasive picture of how "unaided" evolution produces advanced creatures from simple ones by an essentially accidental process. Having built this picture, in the final chapter the book reflects on its religious implications.


Praise For Creatures of Accident: The Rise of the Animal Kingdom…

“Creatures of Accident is no accidental book. It is an elegantly wrought piece of science writing from one of the leading thinkers on the evolution of animals. Arthur deftly guides us through the history of biology, from before Darwin to the latest discoveries of DNA, to create a fascinating argument about how complexity arose on Earth.” —Carl Zimmer, author of Evolution: The Triumph of An Idea and Soul Made Flesh

“In Creatures of Accident, Wallace Arthur gives us a lively and original account of the evolution of complex life forms, and takes on the attacks of Intelligent Design creationism on the integrity of science. This book will be an enjoyable one for both the general reader with a scientific bent and the scientific reader of a general bent.” —Rudolf A. Raff, professor of biology, Indiana University, and author of The Shape of Life: Genes, Development, and the Evolution of Animal Form

“Crisply written, Prof. Arthur's book makes a powerful case for the liberal humanist approach to scientific investigation of biological patterns and evolutionary 'advancement.' It deserves to be read as a corrective by those interested in the Intelligent Design controversy.” —Richard Fortey, Visiting Prof of Palaeobiology, University of Oxford, and author of Earth: An Intimate History

“Creatures of Accident is a vibrant exposition of what biological evolution is really all about, and how it works to result in something as wondrous as a human being. Arthur argues convincingly that the chance duplication of genes and body parts is the raw material from which natural selection produces major increases in biological complexity. What's more, the book is so accessible and well-written that it's fun to read.” —Fred Wilt, author of Principles of Developmental Biology

Wallace Arthur is a professor of zoology at the National University of Ireland, Galway. The author of books including Creatures of Accident, he also serves as European editor of the journal Evolution and Development.
Loading...
or support indie stores by buying on