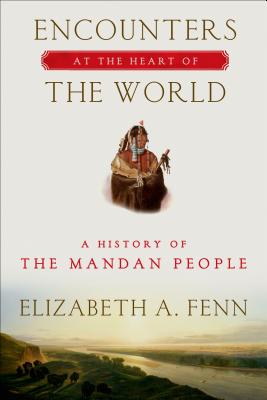 Encounters at the Heart of the World

A History of the Mandan People

Winner of the 2015 Pulitzer Prize for History

Encounters at the Heart of the World concerns the Mandan Indians, iconic Plains people whose teeming, busy towns on the upper Missouri River were for centuries at the center of the North American universe. We know of them mostly because Lewis and Clark spent the winter of 1804-1805 with them, but why don't we know more? Who were they really? In this extraordinary book, Elizabeth A. Fenn retrieves their history by piecing together important new discoveries in archaeology, anthropology, geology, climatology, epidemiology, and nutritional science. Her boldly original interpretation of these diverse research findings offers us a new perspective on early American history, a new interpretation of the American past.

By 1500, more than twelve thousand Mandans were established on the northern Plains, and their commercial prowess, agricultural skills, and reputation for hospitality became famous. Recent archaeological discoveries show how these Native American people thrived, and then how they collapsed. The damage wrought by imported diseases like smallpox and the havoc caused by the arrival of horses and steamboats were tragic for the Mandans, yet, as Fenn makes clear, their sense of themselves as a people with distinctive traditions endured.

A riveting account of Mandan history, landscapes, and people, Fenn's narrative is enriched and enlivened not only by science and research but by her own encounters at the heart of the world.


Praise For Encounters at the Heart of the World: A History of the Mandan People…

“Encounters at the Heart of the World shows readers that there is much more to Mandan history than merely their suffering at the hands of Euroamerican epidemiology . . . Fenn relies upon deep archival research and a felicitous prose style to bring this forgotten world to life, starting with the Mandans' ancestral migrations from places south and east before their coalescence around the year 1400 in a fifty-mile stretch along the Missouri between the mouths of the Knife and Cannonball rivers. And what a rich and vibrant culture it was. Some of Fenn's best work concerns the material and social life of the Mandans . . . Perhaps the most compelling portion of the book is Fenn's recreation of Mandan cosmology and religious life, particularly the Okipa ceremony, an elaborate and intricate ritual performed every summer . . . The Mandan story is a reminder that even the most flourishing societies can be brought low, in virtually an instant, by the unpredictable workings of the natural world (to say nothing of human foes). But Fenn's account tells us also that cultures can persist and even recover in the wake of such awful devastation.” —Andrew Graybill, The Daily Beast

“Elizabeth Fenn's Encounters at the Heart of the World is a book about those scraps--and about the author's personal encounters with them. It is a book of fragments or, as Ms. Fenn describes it, ‘a mosaic . . . pieced together out of stones from many quarries.' . . . Somehow the fragments cohere into a more compelling portrait than a more linear brush, and a less personally visible artist, could have painted . . . Ms. Fenn is most compelling when she applies her detective skills to things scientific, medical and ecological . . . Ms. Fenn's mosaic brilliantly overcomes the shortcomings of her written and archaeological sources . . . Readers who follow her toward, but never quite into, the heart of the Mandans' world will be richer for the journey.” —Daniel K. Richter, The Wall Street Journal

“Relying on fragmentary documentary records, discoveries by archaeologists, imaginative detective work, evidence uncovered by anthropologists, geologists, climatologists and nutritional scientists, plus paintings and drawings by frontier artists George Catlin, Karl Bodmer and others, Fenn pieces together a rich and remarkably detailed history of this nearly forgotten tribe . . . The product of her work is this wonderfully interesting book that should finally help the Mandans claim their rightful place in history.” —Steve Raymond, The Seattle Times

“Anyone who has seen the sensitive portraits of Mandan chiefs painted in the 1830s by George Catlin and Karl Bodmer will be captivated by Fenn's exhaustively researched history of the tribe that once thrived on the upper Missouri River in present-day North Dakota--at one time the center of northern Plains commerce. Peaking at a population of 12,000 by 1500, and still a vital presence when Lewis and Clark visited in 1804, the Mandans were besieged by a ‘daunting succession of challenges,' including Norway rats that decimated their corn stores, two waves of smallpox, whooping cough, and cholera, reducing their numbers to 300 by 1838. Piecing together the journals of white visitors to this then unmapped land--from the French explorers Lahontan in 1688 and de la Vérendrye 50 years later, to Lewis and Clark, and later Prince Maximilian accompanied by Bodmer, the Swiss painter--and the annual reports to the Commissioner of Indian Affairs, Fenn weaves the historical fabric of this proud people, enhanced by archaeological and climate studies tracing their migrations, food sources, and intertribal conflicts. Simultaneously scholarly and highly readable, Fenn's contribution enriches our understanding of not just Mandan history, but the history and culture of the prereservation northern Plains as well.” —Deborah Donovan, Booklist (starred review)

“Historians thought this book could not be written--a history of a world far from document producing Europeans. Elizabeth A. Fenn has done it, and she has made it a page-turner. Her breathtaking accomplishment will make us see American history in an entirely new way.” —Kathleen DuVal, University of North Carolina; author of The Native Ground

“In this innovative and illuminating book, Elizabeth A. Fenn reorients early American history toward the geographic center of the continent. There, long before the arrival of colonists on the Atlantic coast, the Mandan people built one of the most important and enduring trading centers in America. Using tools from archaeology, anthropology, and epidemiology, Fenn reconstructs their remarkable story and recounts it in absorbing and transparent prose.” —Claudio Saunt, University of Georgia; author of West of the Revolution

“We have been conditioned to view early American history from coastal places inward, but what if we did the opposite and viewed developments from the deep interior outward? Elizabeth A. Fenn's engrossing new book does just that--and to stunning effect. The seemingly isolated Mandan villages in the center of North America emerge as pivotal places where many life-altering forces converged--from European trade and epidemics to the Lewis and Clark expedition. The Mandan history of struggle and resilience is filled with drama.” —Pekka Hämäläinen, University of California, Santa Barbara; author of The Comanche Empire

“Following the Mandan people from their precolonial independence through their adaptation and survival against fierce odds, Elizabeth A. Fenn presents new dimensions of American life all the way from the fifteenth century to our own time. Her book offers a spectacular demonstration of how much is needed to understand just one place and one people, and how that understanding can then illuminate a very large world. Any reader with an interest in colonial, western, and Native American history will gain from reading Encounters at the Heart of the World.” —Edward Countryman, Southern Methodist University; author of Enjoy the Same Liberty

“By recovering the history of a set of native villages at the very heart of our continent, Elizabeth A. Fenn brilliantly shows how we can rethink the past. Working from the native center rather than the colonial and coastal periphery, Fenn deftly reveals the haunting interplay of nature, humanity, loss, survival, and memory in the lives of the Mandans and their neighbors, who both shared and violently contested a demanding yet beautiful land.” —Alan Taylor, University of California, Davis; author of American Colonies

“For almost three centuries, the Mandans' society of farmers and traders dominated one of North America's greatest networks of exchange, hosting and bartering with the French, English, and Spanish; with the Hidatsas, Arikaras, Assiniboines, and Lakota Sioux; and, later, with the hustlers, soldiers, hunters, and artists of the new United States. The Mandan saga is, like all human stories, replete with joy and tragedy, triumph and despair. Drawing on a staggering range of sources, Elizabeth A. Fenn has recovered it and brought this very American story to life.” —Charles C. Mann, author of 1491 and 1493

Elizabeth A. Fenn teaches history at George Washington University. The author of Natives and Newcomers, she lives in Hillsborough, North Carolina.
Loading...
or
Not Currently Available for Direct Purchase