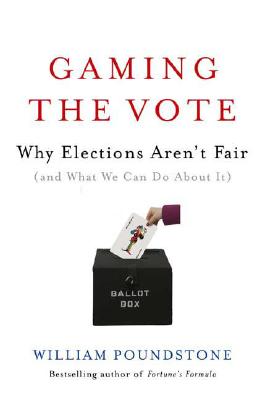 Why Elections Aren't Fair (and What We Can Do About It)

Our Electoral System is Fundamentally Flawed, But There's a Simple and Fair Solution

At least five U.S. presidential elections have been won by the second most popular candidate. The reason was a "spoiler"--a minor candidate who takes enough votes away from the most popular candidate to tip the election to someone else. The spoiler effect is more than a glitch. It is a consequence of one of the most surprising intellectual discoveries of the twentieth century: the "impossibility theorem" of Nobel laureate economist Kenneth Arrow. The impossibility theorem asserts that voting is fundamentally unfair--a finding that has not been lost on today's political consultants. Armed with polls, focus groups, and smear campaigns, political strategists are exploiting the mathematical faults of the simple majority vote. In recent election cycles, this has led to such unlikely tactics as Republicans funding ballot drives for Green spoilers and Democrats paying for right-wing candidates' radio ads. Gaming the Vote shows that there is a solution to the spoiler problem that will satisfy both right and left. A system
called range voting, already widely used on the Internet, is the fairest voting method of all, according to computer studies. Despite these findings, range voting remains controversial, and Gaming the Vote assesses the obstacles confronting any attempt to change the American electoral system. The latest of several books by William Poundstone on the theme of how important scientific ideas have affected the real world, Gaming the Vote is a wry exposé of how the political system really works, and a call to action.


Praise For Gaming the Vote: Why Elections Aren't Fair (and What We Can Do About It)…

“Mr. Poundstone is a clear, entertaining explicator of election science. He easily bridges the gaps between theoretical and popular thinking, between passionate political debate and cool mathematical certainty.” —The New York Times “A handy compendium of alternatives to plurality voting. … Poundstone gives math a leading place in politics.”—Salon.com  “Gaming the Vote entertainingly probes the combative history of voting over the past few centuries.”—Mother Jones “Poundstone’s book raises a big question: how mad do the rest of us have to get before we change a system that just isn’t working?” —Newsweek “Poundstone has a lively style and a penchant for anecdote that make his more difficult passages of analysis accessible and at times even dramatic.” —The Wall Street Journal Poundstone “writes not with a partisan’s bile but with a technician’s delight in explaining all the ways our democracy can give us what we don’t want.” —The Seattle Times “Poundstone always writes with the premise that thinking can be entertaining. His latest book, Gaming the Vote, clearly reasoned, well-researched, and often amusing, deals with the crucially important question: How best does a government ‘by the people’ decide what to do?  He does not find a definitive answer, but he shows why it is so difficult and prepares the citizen to face the question responsibly.” —Rush Holt, U.S. House of Representatives (NJ-12) “In 1948 economist Kenneth Arrow dropped a bombshell on political scientists. He proved that no voting system can be perfect. Poundstone’s eleventh book is a superb attempt to demystify Arrow’s amazing achievement, and to defend ‘range voting’ as the best voting system yet devised. His account is interwoven with a colorful history of American elections, from the corrupt politics of Louisiana to Ralph Nader as the ‘spoiler’ whose splitting of the Democratic votes helped elect George W. Bush. A chapter covers Lewis Carroll’s little-known valiant efforts to solve the voting problem. A raft of amusing political cartoons enliven Poundstone’s prose. There is no better introduction to the inescapable flaws and paradoxes of all voting systems than this eye-opening, timely volume.”—Martin Gardner, author of Are Universes Thicker than Blackberries? and more than 60 other titles “Gaming the Vote is a witty, irreverent tour d’horizon of voting theories, voting theorists, and their quarrels. Unlike many academic brouhahas, the stakes here are high. Both citizens and politicians will delight in the tales Poundstone tells, but it won’t always be easy to tell who’s right. Nevertheless, Poundstone cuts through a lot of the obfuscation and takes sides, which won’t please everybody.” —Steven J. Brams, Department of Poltics, New York University, and author of Mathematics and Democracy: Designing Better Voting and Fair-Division Procedures

“Gaming the Vote is a must-read for anyone interested in the process and outcomes of voting.  Poundstone gives a clear and remarkably accurate account of the rich theoretical literature. At the same time, his examples of voting anomalies in real elections are both lively and revealing.” —Kenneth J. Arrow, professor of economics (emeritus) at Stanford University and winner of the 1972 Nobel Prize in Economic Science

"In this masterful presentation William Poundstone sketches the history of voting systems, elucidates ideas such as Borda counts, Condorcet winners, and range voting, and shows how changing our system could make it less likely to yield paradoxical and unfair results. Ranging easily over material as disparate as Arrow's impossibility theorem and recent presidential elections, he makes it clear just how unclear is the question, "Who won?" The book has my vote." —John Allen Paulos, author of Innumeracy: Mathematical Illiteracy and Its Consequences and the forthcoming Irreligion: A Mathematician Explains Why the Arguments for Religion Just Don't Add Up