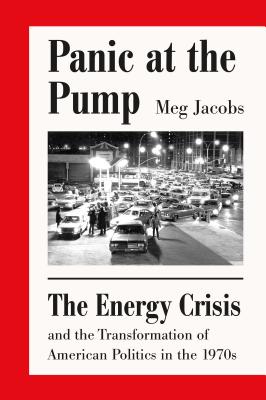 Panic at the Pump

In 1973, the Arab OPEC cartel banned the export of oil to the United States, sending prices and tempers rising across the country. Dark Christmas trees, lowered thermostats, empty gas tanks, and the new fifty-five-mile-per-hour speed limit all suggested that America was a nation in decline. “Don’t be fuelish” became the national motto. Though the embargo would end the following year, it introduced a new kind of insecurity into American life—an insecurity that would only intensify when the Iranian Revolution led to new shortages at the end of the decade.

As Meg Jacobs shows, the oil crisis had a decisive impact on American politics. If Vietnam and Watergate taught us that our government lied, the energy crisis taught us that our government didn’t work. Presidents Nixon, Ford, and Carter promoted ambitious energy policies that were meant to rally the nation and end its dependence on foreign oil, but their efforts came to naught. The Democratic Party was divided, with older New Deal liberals who prized access to affordable energy squaring off against young environmentalists who pushed for conservation. Meanwhile, conservative Republicans argued that there would be no shortages at all if the government got out of the way and let the market work. The result was a political stalemate and panic across the country: miles-long gas lines, Big Oil conspiracy theories, even violent strikes by truckers.

Jacobs concludes that the energy crisis of the 1970s became, for many Americans, an object lesson in the limitations of governmental power. Washington proved unable to design an effective national energy policy, and the result was a mounting skepticism about government intervention that set the stage for the rise of Reaganism. She offers lively portraits of key figures, from Nixon and Carter to the zealous energy czar William Simon and the young Donald Rumsfeld and Dick Cheney. Jacobs’s absorbing chronicle ends with the 1991 Gulf War, when President George H. W. Bush sent troops to protect the free flow of oil in the Persian Gulf. It was a failure of domestic policy at home that helped precipitate military action abroad. As we face the repercussions of a changing climate, a volatile oil market, and continued turmoil in the Middle East, Panic at the Pump is a necessary and lively account of a formative period in American political history.


Praise For Panic at the Pump: The Energy Crisis and the Transformation of American Politics in the 1970s…

"Panic at the Pump is a thoughtful tour of an era we would rather not think about, carefully retracing the economics that made the United States dependent on oil imports, and the crises that made that dependence so painful." —Matthew L. Wald, The New York Times Book Review

"In her well-researched book Panic at the Pump, Meg Jacobs takes us back to the twin oil shocks of the 1970s . . . It was, Jacobs argues persuasively, a time that transformed American politics . . . [she] gives us a rich chronicle of this period . . . At a time when political candidates are bickering over how to make America great again, there is much to recommend in this book." —Steven Mufson, The Washington Post

"Wonderfully insightful . . . Making excellent use of a plethora of published and unpublished sources, Jacobs deftly draws together the manifold strands that made up the U.S. response to the oil shocks that began with the Arab oil embargo of 1973 and continued for the rest of the decade . . . Jacobs convincingly demonstrates its long-term consequences . . . [and] succeeds masterfully in explaining both the way the oil crises of the 1970s unfolded and how they helped to shape subsequent developments, domestic as well as foreign . . . Panic at the Pump is without question an important book that contributes mightily to our understanding of the modern American state, the U.S. political system, and contemporary U.S. foreign policy." —Mary Ann Heiss, American Historical Review

"Jacobs, a Princeton historian, has written a history of the political battles over energy that wracked the United States in the years following the Arab oil embargo in 1973. The energy crisis, she contends, transformed American politics, decimating liberalism and bringing anti-government conservatives to power." —Marc Levinson, The Wall Street Journal

"Jacobs’s account is more descriptive than prescriptive, but, in the interest of economic, environmental, and physical security, she calls on our current leaders to promote independence from fossil fuels." —The New Yorker

"Meg Jacobs reviews the falling US production levels and rising consumption that set the stages for the first stirrings of the energy crisis in the early 1970’s. She recalls with tremendous accuracy—trust me, I was there—how the mere act of keeping your car filled with gasoline became a national obsession . . . If you think you understand the politics of energy today, it’s good to know the genealogy of some of those issues. Jacobs’ book is a good place to learn." —John Kingston, "The Barrel," Platts.com

"[Jacobs] has unearthed an immense quantity of internal correspondence, policy memos, and public statements from multiple administrations that help explain how the crisis played out behind closed doors along the corridors of power . . . The result, Jacobs notes, was a decade-long 'object lesson in the limitations of governmental power' that divided the Democratic Party, helped elect Ronald Reagan to the presidency, and gave an edge to free-market conservatives as they made their case for further deregulation and decontrol of the economy." —Jefferson Decker, The Nation

"Jacobs makes a strong case that long gas station lines were no less central a part of the [1970s] decade—and one of its deepest political currents. Jacobs argues convincingly that Washington's inability to develop an energy policy after this wrenching national experience was an object lesson in the failure of governmental regulation and power—one whose import endures strongly today." —The National Book Review

"Meg Jacobs makes a strong case that these twin energy shocks [in 1973 and 1979] shook up the American psyche on the level of Watergate or Vietnam . . . It wouldn’t be a bad idea for millions of Americans to listen to an audiobook version of Panic at the Pump as they drive around in stop-and-go traffic on roads more and more clogged with vehicles that get fewer and fewer miles per gallon." —Michael Causey, Washington Independent Review of Books

"In this intriguing and important book, Meg Jacobs successfully traces the roots of much of our current political and economic life to the energy debates of the 1970s. Anyone seeking to understand the way we live now will do well to consult Jacobs's incisive account of a decade at once remote and resonant." —Jon Meacham, author of Destiny and Power: The American Odyssey of George H. W. Bush

"The energy crisis of the 1970s created a political perfect storm, hastening the crisis of an already divided Democratic Party and clearing the way for the age of Ronald Reagan. In retelling that story, Meg Jacobs’s wonderfully detailed and lucid Panic at the Pump is a major contribution to late twentieth century U.S. history, describing a convergence of social and economic as well as political forces that transformed the nation, with resounding effects down to our own times." —Sean Wilentz, author of The Rise of American Democracy and The Age of Reagan

"Meg Jacobs has written a lively, incisive, and important narrative of how the energy crisis flummoxed presidents and policy-makers of the 1970s and 1980s and eroded the public's faith in government." —Jonathan Alter, author of The Center Holds: Obama and His Enemies

"Meg Jacobs’s Panic at the Pump offers a powerful account of how the energy crisis of the 1970s transformed American politics. With long gas lines, violent trucker strikes, and contentious debates in Washington about regulation, almost every American who lived through the era felt the weight of this challenge and vividly remembers the fears it provoked. Jacob's book will be eye opening for those who want to learn about what actually happened. This riveting narrative is a must-read for policymakers, reporters, and every American citizen who seeks to understand how the nation can achieve a stronger national energy policy." —Henry Waxman, former congressman and author of The Waxman Report

"Through copious research and clear, vivid writing, Meg Jacobs has made a persuasive case that the politics of oil is the key to understanding a generation’s worth of high-level American diplomacy and economic policy. In so doing she makes our recent history feel absolutely fresh, and absolutely relevant in meeting our next set of challenges." —Nicholas Lemann, professor of journalism and dean emeritus at the Columbia University Graduate School of Journalism

"In Panic at the Pump, Jacobs weaves together history, politics, and culture with unusual narrative skill to engage the reader in a good story while explaining why U.S. energy policy has so often fallen flat on its face." —Michael Oppenheimer, professor of geosciences and international affairs, Princeton University, and co-editor of Climatic Change

Meg Jacobs is a research scholar in the Woodrow Wilson School at Princeton University. Her first book, Pocketbook Politics: Economic Citizenship in Twentieth-Century America (2005), won the Organization of American Historians' Ellis W. Hawley Prize for the best book on political economy, politics, and institutions of the modern United States, as well as the New England History Association's Best Book Award.
Loading...
or
Not Currently Available for Direct Purchase