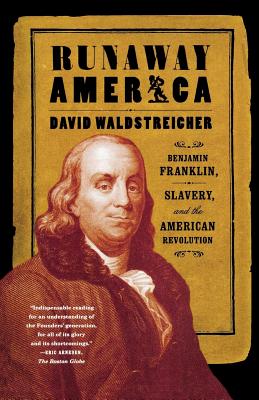 Scientist, abolitionist, revolutionary: that is the Benjamin Franklin we know and celebrate. To this description, the talented young historian David Waldstreicher shows we must add runaway, slave master, and empire builder. But Runaway America does much more than revise our image of a beloved founding father. Finding slavery at the center of Franklin's life, Waldstreicher proves it was likewise central to the Revolution, America's founding, and the very notion of freedom we associate with both.

Franklin was the sole Founding Father who was once owned by someone else and was among the few to derive his fortune from slavery. As an indentured servant, Franklin fled his master before his term was complete; as a struggling printer, he built a financial empire selling newspapers that not only advertised the goods of a slave economy (not to mention slaves) but also ran the notices that led to the recapture of runaway servants. Perhaps Waldstreicher's greatest achievement is in showing that this was not an ironic outcome but a calculated one. America's freedom, no less than Franklin's, demanded that others forgo liberty.

Through the life of Franklin, Runaway America provides an original explanation to the paradox of American slavery and freedom.

David Waldstreicher, Professor of History, Temple University, is a historian of early and nineteenth century America. His books include In the Midst of Perpetual Fetes: The Making of American Nationalism, 1776-1820 (1997); The Struggle Against Slavery, 1619-–1863: A History in Documents (2001); Runaway America: Benjamin Franklin, Slavery and the American Revolution (2004); and Slavery's Constitution: From Revolution to Ratification (2009).
or support indie stores by buying on
Copyright © 2020 American Booksellers Association