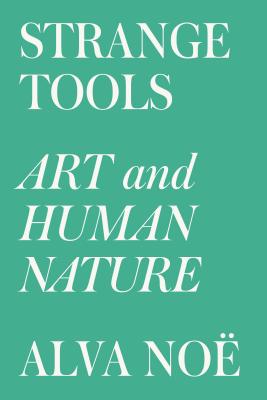 What is art? Why does it matter to us? What does it tell us about ourselves?

Normally, we look to works of art in order to answer these fundamental questions. But what if the objects themselves are not what matter? In Strange Tools: Art and Human Nature, the philosopher and cognitive scientist Alva Noë argues that our obsession with works of art has gotten in the way of understanding how art works on us.

For Noë, art isn’t a phenomenon in need of an explanation but a mode of research, a method of investigating what makes us human—a strange tool. Art isn’t just something to look at or listen to—it is a challenge, a dare to try to make sense of what it is all about. Art aims not for satisfaction but for confrontation, intervention, and subversion. Through diverse and provocative examples from the history of art-making, Noë reveals the transformative power of artistic production. By staging a dance, choreographers cast light on the way bodily movement organizes us. Painting goes beyond depiction and representation to call into question the role of pictures in our lives. Accordingly, we cannot reduce art to some natural aesthetic sense or trigger; recent efforts to frame questions of art in terms of neurobiology and evolutionary theory alone are doomed to fail.

By engaging with art, we are able to study ourselves in profoundly novel ways. In fact, art and philosophy have much more in common than you might think. Reframing the conversation around artists and their craft, Strange Tools is a daring and stimulating intervention in contemporary thought.

“With incisive arguments and in crisp and engaging prose, Strange Tools brings the discourse on the function of art and beauty to a different level.” —Giovanni Frazzetto, Science

“A stimulating and wide-ranging investigation of the meaning of art . . . A searching and learned response to vexing, long-debated questions.” —Kirkus Reviews

“Noë offers a unique analysis on the role of art, and also philosophy, in our lives. Readers with an interest in philosophy, aesthetics, or art will find this an accessible and engaging read.” —Scott Duimstra, Library Journal

“As a neurologist, confronted every day by questions of mind, self, consciousness, and their basis, I find Alva Noë's concepts both astounding and convincing.” —Oliver Sacks

“Alva Noë's Strange Tools challenges some of our preconceptions not only about art and human nature, but also about philosophy and science. The book shows how bad ideas about each of these subjects support bad ideas about the others. It is passionately argued, and readers will want to argue back at various points; that is true too of the best philosophy and the best writing about art.” —Hilary Putnam, Cogan University Professor Emeritus of Philosophy, Harvard University

“As Alva Noë gracefully dispatches one reductionist account after another (the neurological, the sociobiological, the evolutionary, and so forth), his subject-the very nature and provenance of art-just keeps expanding outward. And every page seems to open onto fresh vantages, crisp aperçus evocative of how art endlessly affords us all new ways not just of seeing, but of being” —Lawrence Weschler, author of Seeing Is Forgetting the Name of the Thing One Sees

“In his new book, Alva Noë spiritedly suggests that, at their best, art and philosophy are practices of inquiry into the human condition. He defends, convincingly, the idea that the value of those practices derives from the questions they pose and the pleasure we experience when we glean a workable, reorganizing answer. Along the way he argues, advisedly, against reductive accounts of aesthetics. A stimulating read.” —Antonio Damasio, David Dornsife Chair in Neuroscience and director of the USC College Brain and Creativity Institute, University of Southern California

“The projects of philosophy and of art-making cross over in this remarkable book. Read it, and whatever you thought about both will be radically challenged.” —Alexander Nagel, Institute of Fine Arts, New York University

“Organisms organize their interaction with their environments. Human beings can consciously organize and reorganize that interaction. Making, appreciating, and talking about art are among the ways that human beings do this, and thus are characteristic of human life itself. On these simple but undeniable truths, Alva Noë builds a devastating critique of contemporary 'neuroaesthetics' and an illuminating account of the role of art in the human conversation. This is a work in the grand tradition of John Dewey's Art as Experience, and one of the most important books in that tradition since Dewey's own.” —Paul Guyer, Jonathan Nelson Professor of Humanities and Philosophy, Brown University

“Many have told us, passionately, that art shapes human nature in ways science alone cannot explain, but Noë doesn’t just tell; he shows how many insights flow from an open-minded understanding of both art and science combined. He walks the tightrope between reductionism and mysterianism with panache, and part of the fun of reading this book is watching him recover from his narrow escapes, almost abandoning naturalism in favor of a romanticized vision of science as poetry, and almost giving some ideologues more respect than they deserve.” —Daniel Dennett, author of Intuition Pumps and other Tools for Thinking

Alva Noë is a professor of philosophy at the University of California, Berkeley, where he is also a member of the Institute for Cognitive and Brain Science. He is the author of the books Out of Our Heads and Action in Perception.
Loading...
or
Not Currently Available for Direct Purchase