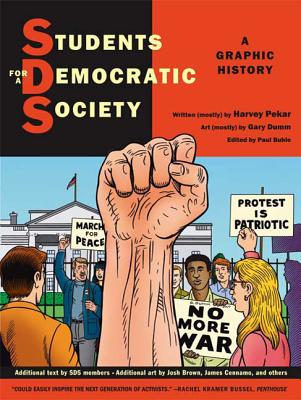 Students for a Democratic Society

By the late 1960s, America felt like it was teetering on the edge of a vast transformation. Helping push it over that edge was a brigade of young radicals, the Students for a Democratic Society, who were fighting the establishment for peace abroad and equality at home. In Students for a Democratic Society: A Graphic History, the famed graphic novelist Harvey Pekar, the gifted artist Gary Dumm, the renowned historian Paul Buhle, and a marvelous cast of they-were-there contributors illustrate their struggle, bringing to life the tumultuous decade that first defined and then was defined by the men and women who gathered under the SDS banner.

Students for a Democratic Society captures the idealism and activism that drove a generation of young Americans to believe that even one person's actions can help transform the world.


Praise For Students for a Democratic Society: A Graphic History…

“Powerfully dramatizes the broad panorama of mayhem and confrontation in the '60s.” —The Buffalo News

“Could easily inspire the next generation of activists.” —Penthouse

Harvey Pekar is the coauthor of Not the Israel My Parents Promised Me (Hill and Wang, 2012) and is best known for his graphic autobiography, American Splendor, which was based on his long-running comic-book series and adapted into a film of the same name. He died in 2010.

Paul Buhle is a senior lecturer in history at Brown University and the editor of the Encyclopedia of the American Left, among other books. He lives in Providence, Rhode Island.