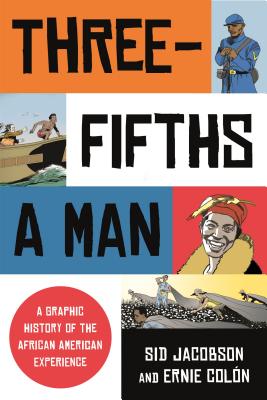 A Graphic History of the African American Experience

In Three-Fifths a Man, the award-winning and bestselling team of Sid Jacobson and Ernie Colón highlights the key events in African American history, taking us from the sixteenth-century Atlantic slave trade to the election of Barack Obama and the Black Lives Matter movement. Through richly drawn four-color illustrations and concise, accessible chapters, Jacobson and Colón convey a history of hardship and hope—a painful and necessary process, full of victories and setbacks, from the Amistad mutiny and the Three-Fifths Compromise to Brown v. Board of Education and the Scottsboro Boys. We see the first African slaves arriving in Jamestown in 1619, watch as the “peculiar institution” undermines our founding ideals, witness the triumph of the Union in the Civil War followed by the collapse of Reconstruction in the South, and observe the hard-won progress of the civil rights movement from the early twentieth century to its contemporary iterations.

Jacobson and Colón also explore the pivotal moments in American history with attention to the major contributions of African Americans, reshaping our understanding of the American Revolution, the New Deal, and more. And a series of profiles of prominent African Americans provides key information about these leaders, who exposed injustice, championed freedom, and pushed for change. With vivid illustrations and lucid prose, Three-Fifths a Man brings history to life as only the graphic form can.

Ernie Colón (1931-2019) is the illustrator of the New York Times bestseller The 9/11 Report: A Graphic Adaptation, After 9/11, Che, and Anne Frank (all published by Hill and Wang). He has worked at Marvel Comics, where he oversaw the production of Spider-Man, and at DC Comics, where he did the same for Green Lantern, Wonder Woman, Blackhawk, and the Flash.
or
Not Currently Available for Direct Purchase