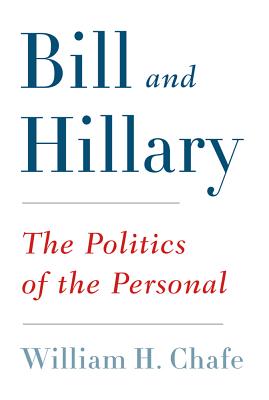 The Politics of the Personal

In Bill and Hillary: The Politics of the Personal, the distinguished historian William H. Chafe boldly argues that the trajectory of the Clintons' political lives can be understood only through the prism of their personal relationship. Each experienced a difficult childhood. Bill had an abusive stepfather, and his mother was in denial about the family's pathology. He believed that his success as a public servant would redeem the family. Hillary grew up with an autocratic father and a self-sacrificing mother whose most important lesson for her daughter was the necessity of family togetherness. As an adolescent, Hillary's encounter with her youth minister helped set her moral compass on issues of race and social justice.

From the day they first met at Yale Law School, Bill and Hillary were inseparable, even though their relationship was inherently volatile. The personal dynamic between them would go on to determine their political fates. Hillary was instrumental in Bill's triumphs as Arkansas's governor and saved his presidential candidacy in 1992 by standing with him during the Gennifer Flowers sex scandal. He responded by delegating to her powers that no other First Lady had ever exercised. Always tempestuous, their relationship had as many lows as it did highs, from near divorce to stunning electoral and political successes.

Chafe's many insights—into subjects such as health care, Kenneth Starr, welfare reform, and the extent to which the Lewinsky scandal finally freed Hillary to become a politician in her own right and return to the consensus reformer she had been in college and law school—add texture and depth to our understanding of the Clintons' experience together. The latest book from one of our preeminent historians, Bill and Hillary is the definitive account of the Clintons' relationship and its far-reaching impact on American political life.

William H. Chafe is the Alice Mary Baldwin Professor of History at Duke University. He is the author of many books on race, gender, and politics, including, most recently, The Rise and Fall of the American Century: The United States from 1890 to 2008, The Unfinished Journey: America Since World War II, and Private Lives/Public Consequences: Personality and Politics in Modern America.

Praise For Bill and Hillary: The Politics of the Personal…

“Chafe understands, as do too few historians and biographers, that the personal and public lives of political figures cannot be separated . . . [and he] is quite right to insist that the stories of Bill and Hillary Clinton prove the point.” —Jonathan Yardley, The Washington Post

“Riveting . . . Chafe sees clearly what we who were there, chronicling the Clintons in real time, missed.” —David M. Shribman, The Boston Globe

“The strength of this book lies in Chafe's reconstruction of the Clinton's early lives and the way their connection affected the decisions Bill Clinton made as Governor of Arkansas and as President . . . [Bill and Hillary is] a welcome reminder of the great promise that the Clinton "co-presidency" initially held, and of the attributes, from Clinton's intellect to his willingness to engage on racial issues and his ability to connect with people, that made those of us who saw him sworn in truly believe, for a time, in ‘a place called Hope.'” —The Toronto Star

“Chafe . . . delivers a superior portrait of how the dynamic between Bill and Hillary Clinton affected their achievements in public life.” —Publishers Weekly (starred review)

“An engaging look at the personal relationship behind one of the most powerful political marriages in the nation's history.” —Booklist

“An illuminating glimpse behind the scenes.” —Kirkus

“Not since Franklin and Eleanor has a power couple in the White House fascinated the public as much as Bill and Hillary. How did their personal journeys--especially their marriage--shape the Clinton years? For those of us who worked with the Clintons, this book, by one of the nation's best historians, brings a keen eye and fresh insights to the intersection of their personalities and their exercise of power.” —David Gergen, senior political analyst for CNN and adviser to four U.S. presidents

“A fascinating analysis of how Bill and Hillary Clinton's different family backgrounds and complicated marital history shaped their political fortunes. William H. Chafe documents how the personal relationship between these two brilliant but flawed individuals created blind spots and self-defeating behaviors that often undermined their ability to further the political and ethical goals they sincerely supported. Beautifully written.” —Stephanie Coontz, author of A Strange Stirring: The Feminine Mystique and American Women at the Dawn of the 1960s

“In this mesmerizing account, one of the most astute historians of our era pulls back the curtain on the struggles and passions of the world's most powerful couple. William H. Chafe takes readers behind the scenes to reveal Bill and Hillary as they have never been seen before.” —Elaine Tyler May, author of America and the Pill: A History of Promise, Peril, and Liberation

“In electrifying fashion, William H. Chafe reveals that the key to understanding the Clinton presidency is the tortuous relationship between Bill and Hillary. He shows that the First Lady's domination of the president because of his sexual misadventures brought about the failures of his first years in office, but also steeled him to survive subsequent disasters, conspicuously the Monica Lewinsky affair. For any reader seeking to unravel the Byzantine politics of the 1990s, Chafe's book is indispensable.” —William E. Leuchtenburg, author of In the Shadow of FDR: From Harry Truman to Barack Obama

“Only a writer as gifted as William H. Chafe could have written this splendid book. In luminous and page-turning prose, Bill and Hillary reveals how two strikingly independent individuals, each the product of difficult beginnings, together changed America and symbolized a new world for women. This is a deeply insightful and warmly empathetic portrait of personal ambition, a complicated marriage, and a powerful political partnership.” —Alice Kessler-Harris, author of A Difficult Woman: The Challenging Life and Times of Lillian Hellman