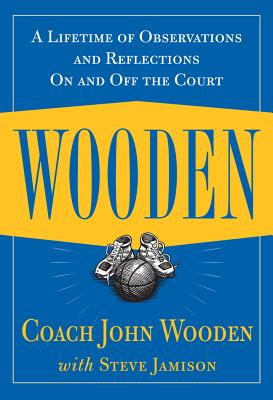 A Lifetime of Observations and Reflections on and Off the Court

"I am just a common man who is true to his beliefs."--John Wooden

Evoking days gone by when coaches were respected as much for their off-court performances as for their success on the court, Wooden presents the timeless wisdom of legendary basketball coach John Wooden.

In honest and telling passages about virtually every aspect of life, Coach shares his personal philosophy on family, achievement, success, and excellence. Raised on a small farm in south-central Indiana, he offers lessons and wisdom learned throughout his career at UCLA, and life as a dedicated husband, father, and teacher.

These lessons, along with personal letters from Bill Walton, Denny Crum, Kareem Abdul-Jabbar, and Bob Costas, among others, have made Wooden: A Lifetime of Observations and Reflections on and off the Court an inspirational classic.

Author Profiles John Wooden (1910-2010), guided the UCLA Bruins to ten NCAA basketball championships over a 12-year period, including four perfect seasons and an 88-game winning streak. He was named ESPN's "Greatest Coach of the 20th Century" and voted "#1 Coach of All Time" by The Sporting News. Sports Illustrated said it best when they said: "There's never been a finer man in American sports than John Wooden, or a finer coach." In 2003 John Wooden was awarded the Presidential Medal of Freedom. Steve Jamison is America's foremost author and authority on the life and philosophy of John Wooden. Mr. Jamison is a consultant to the UCLA Anderson Scool of Business' John Wooden Global Leadership Program. He has collaborated with Coach Wooden on an award-winning PBS presentation as well as several books, including his final book, The Wisdom of Wooden: My Century On and Off the Court.
or support indie stores by buying on
Copyright © 2020 American Booksellers Association