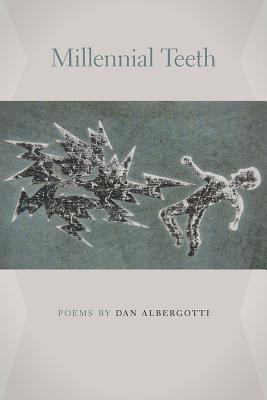 The poetry in Millennial Teeth will feel both refreshingly new and strangely familiar to Albergotti’s audience. Some poems pay direct tribute to such literary luminaries as Wallace Stevens and Philip Larkin, while others give nods to icons of pop culture, from Radiohead to Roman Polanski. The narrator muses on the resurrection of Christina the Astonishing, the works of Coleridge, and the mindless duties of minor players in Shakespeare’s Hamlet.

Yet these familiar faces are not our friends; they are juxtaposed with the heartbreaking apocalypses, both natural and man-made, that have plagued the world since the first plane flew into the World Trade Center. A reluctant witness to such events, the narrator of these poems attempts to navigate his own personal crises, including the mental illness and dementia of loved ones and the inability to connect with others, from the darkness of a personal orbit far from the sun. As he vehemently rejects the notions of religious succor, immortality, and the passive acceptance of fate, he simultaneously yearns to be proven wrong. Yet despite his trials, Albergotti’s narrator maintains a gallows humor and wry insight that balance his despair.

A riveting exploration of the all-too-human struggle between faith and doubt, skepticism and obsession, Millennial Teeth has both heart and bite in plenty.

“Dan Albergotti is a poet deeply hurt by the world—as he should be, as anyone who feels deeply should be. But his poems are not merely a record of that hurt, they are filled with an implicit hope of what is still possible—the way their elegant formal scaffolding suggests the possibility of justice in ‘an intolerable world,’ the way that the precision and beauty of Albergotti’s language is evidence that the better angels of our nature might, in this life, save us. Throughout the poems’ despair, the poet’s soul is resilient. Millennial Teeth is a beautiful and necessary book.”—Natasha Trethewey, author of Thrall

“Dan Albergotti’s poems address the terrors of being—war, madness, cruelty—but with such tenderness and heart that on the last page one is left with hope, not for life after death but for an ever-evolving openness to each moment as it comes decked out in all the craziness and beauty the world has to offer.”—Barbara Hamby, author of On the Street of Divine Love

“Albergotti’s poems are passionate and yet skeptical of the things they are passionate about. He writes of family, love, poetry, and the world around us from the perspective of history, even the perspective of the cosmos, and that knowledge imbues his poems with a cool understanding of the limitations and strengths of his warm heart. Millennial Teeth is a wonderfully ambitious collection of poems that soar while still remaining grounded in the world, and the poems are as deft, sure, exact, and expansive as their ambitions.”—Andrew Hudgins, author of A Clown at Midnight

“Albergotti often sounds more like an heir to George Herbert or Ben Jonson than to any modern writer—which is to say that he is by turns a religious poet, a formalist of great inventiveness, and a subtle wit. At the heart of Millennial Teeth is his sequence of radically reshaped sonnets, which play the dozens with the form as they tap into its age-old power. Even heartbroken, even schooled by loss, Albergotti sings of love. In an age of flash and chatter, this is a book of soulful, serious poems.”—Patrick Phillips, author of Boy

"These poems are ambitious, and broad in theme, and a tour de force in form."—Alabama Writer's Forum

Dan Albergotti is a professor at Coastal Carolina University in Conway, South Carolina. The author of one book of poetry, The Boatloads, and two chapbooks, Charon’s Manifest and The Use of the World, he has also published his poetry in the Cincinnati Review, Five Points,the Southern Review,the Virginia Quarterly Review,and Pushcart Prize XXXIII,as well as other journals and anthologies. He has received fellowships and scholarships from the Bread Loaf Writers’ Conference, the Sewanee Writers’ Conference, the South Carolina Arts Commission, the Hambidge Center for Creative Arts and Sciences, and the Virginia Center for the Creative Arts.