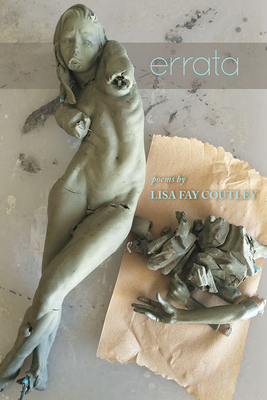 Lisa Fay Coutley’s lyrical debut collection, Errata, investigates the delicate balance between parent and child, love and loss, hope and grief. Errata’s narrator reflects on struggles and fears that span generations in compositions that are at once musical and bleak. Coutley’s narrative journey is often a dark one, exploring not only the loss of loved ones but also the potential to lose one’s very self. The collection unravels the lingering consequences of abuse and addiction, yet threads of hope and determination weave a finely wrought path through the dark side of human relationships, illuminating the power of the will to survive. Coutley’s sharp yet tender collection will both haunt readers and move them to reflect, to remember, and most of all, to persevere.

“Taking Sylvia Plath as its acknowledged lodestar, Coutley’s bold first collection offers an unsentimental extension of midcentury confessional poetry. In spare, angular language that snarls with music, she gives fierce voice to the daughter, the lover, the mother to expose the secret chafes and reframings of a woman’s experience, bearing witness to the errata of lived experience against expectation—‘not,’ as she writes, ‘for the transformation but the record.’ Coutley dares her readers to a staring contest and never looks away.”—Kimberly Johnson, author of Uncommon Prayer

“The beauty in Errata is a perilous one—the landscape of the book its own destiny—corrective, exacting. Her lexicon holds with lovely tension ‘the word fragile, the word impassable’—and still we learn from Coutley to navigate ‘by the compass of a rattlesnake’s tongue’ and to trust ‘ravens tugging at the firmament.’ Her subjects ranging from family and motherhood to mortality and the inescapable dangers of the ordinary, Coutley’s poems sustain ‘the urgency of homing bones.’ Errata is an unforgettable volume.”—Claudia Emerson, author of The Opposite House

“Lover, mother, daughter, poet: each of Lisa Fay Coutley’s identities plays a necessary role in this balanced and brave first collection that speaks with the wisdom of a second or third. Her ability to split the difference between lyric and narrative registers allows Errata to become song and story simultaneously—the act of leaving and, later, the looking back at what’s been left.”—Dorianne Laux, author of The Book of Men

“Coutley gathers up the strongest of her images and strings them together with a needle of intense yearning and the thread of a very strong line. The ache of yearning here exists between man and woman, mother and son, daughter and father or mother, who powerfully attract and also repel like magnets. The startling objects of her imagery, such as a kitchen knife or a cigarette, contain both domestic bliss and certain danger, tenderness and precision. Coutley’s poetry places these objects not only in the field of our vision but also in our hands.”—John Poch, author of Fix Quiet

“Errata is the latest addition to the outstanding Crab Orchard Series in Poetry from the Southern Illinois University Press and is very highly recommended.” –The Midwest Book Review

Lisa Fay Coutley is an assistant professor of creative writing, with an emphasis on poetry, at Snow College in Utah. She was awarded a fellowship from the National Endowment for the Arts (2013), received scholarships to the Sewanee and Bread Loaf Writers’ Conferences, and won an Academy of American Poets Levis Prize. Her poetry has appeared in many journals and books, including Crazyhorse, Gulf Coast, Best of the Net 2013, and Best New Poets 2010. Errata is her first book.
Loading...
or
Not Currently Available for Direct Purchase