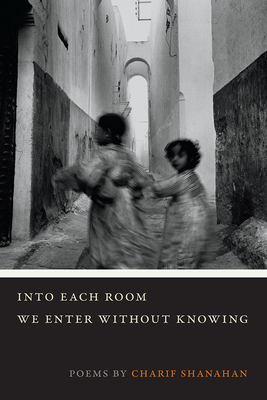 In this affecting poetry debut, Charif Shanahan explores what it means to be fully human in our wounded and divided world. In poised yet unrelenting lyric poems, Shanahan—queer and mixed-race—confronts the challenges of a complex cultural inheritance, informed by colonialism and his mother’s immigration to the United States from Morocco, navigating racial constructs, sexuality, family, and the globe in search of “who we are to each other . . . who we are to ourselves.”

With poems that weave from Marrakesh to Zürich to London, through history to the present day, this book is, on its surface, an uncompromising exploration of identity in personal and collective terms. Yet the collection is, most deeply, about intimacy and love, the inevitability of human separation and the challenge of human connection. Urging us to reexamine our own place in the broader human tapestry, Into Each Room We Enter without Knowing announces the arrival of a powerful and necessary new voice.

"Shanahan’s ability to translate precise meditations on personal identity into universal issues of race and ethnicity is spectacular.... We are lucky to have this collection."—Chicago Review of Books

"A master of shaping his dialectic through lyrical groundwork.... Calm and potent."—Los Angeles Review of Books

"Shanahan never makes anything mundane or belittled by comparison. He allows space for much to be consequential. People and things, violent or kind, arrive and inflect, whether by inches or miles."—The Paris Review

"Shanahan breaks fresh ground in this painfully raw debut, dissecting the self in its cultural context via speakers who fearlessly claim both vulnerability and culpability. Shanahan, the Bronx-raised child of a Moroccan mother and an Irish-American father, superimposes Morocco’s multiple colonial legacies over American racial politics. The opener, “Gnawa Boy, Marrakesh, 1968,” establishes an uncompromising documentary tone and a grasp of resonant polarities: “One palm faces down to show the black/ Surface of hand, the other facing up/ White as his desert’s sky.” Shanahan binds the personal and political in his deft free-verse lyrical suite “Homosexuality.” Meanwhile, “Passing” conflates the notion of ethnic camouflage with the experience of journey by train: “The train slides into a long tunnel/ The lights flicker off// and I am back inside my mother.” As locations—Ticino, Switzerland; Zurich; Budapest—fly by in chromatic snapshots, the travelogue turns psychological. Thematic symmetries, subtly sonorous internal rhymes, and emphatic cadences weave into a fine, fray-resistant fabric. The reader gets caught in mesmerizing “untold cascading reflections,” as if identity were the waterfall of which Shanahan writes in “Wanting to Be White.” Shanahan’s is a vital and profound new voice, and his eyebrow-raising interrogation leaves the reader with afterimages “as the eye/ after the shock flash/ still sees/ the lightning.”—Publisher's Weekly, Starred Review

“Charif Shanahan’s Into Each Room We Enter without Knowing is a heroic first collection where an alert dialogue beckons us, and we risk entering. Here in these pages the politics of color is highly personal; in a time of bleaching creams and psychological erasures, where there’s an attempt to diminish the African, this poet confronts himself and family head-on, and in doing so, through wit and an astute sense of history, his poetry dares to affect the reader. These poems cross borders in the blood and through an imagination that challenges us. Each trope is made of feeling. We need Shanahan’s voice in this time of reckoning with ourselves as a complex nation, where each of us may understand implicitly when a speaker asks, ‘What pattern of occasion will free him?’”—Yusef Komunyakaa, Pulitzer Prize–winning author of The Emperor of Water Clocks

“Charif Shanahan’s debut collection, Into Each Room We Enter without Knowing, is an intricate meditation on the complexities of identity, the difficulties of relationships—with parents, with lovers—and the search for selfhood, ‘who we are to ourselves.’ These are resonant poems, both searching and tender. The poet writes: ‘I’ll sit in silence, / drinking hot tea to scald the place / in my body where the pain roots.’ From that pain what remains is not merely the hurt but the light that emanates from the wound.”—Natasha Trethewey, former U.S. Poet Laureate and Pulitzer Prize–winning author of Native Guard

“From Marrakesh to London to Zürich to our bedrooms and kitchens enters this song of grief and clarity of perspective that is sobering. Lyrical and unforgiving, Shanahan’s voice sees our bodies for what they are, in our streets, in our politics, in our beds, in our racist and ruthless empire where even the sky can be ‘ill-fitting, unhinging, barely awake.’ With Shanahan as our guide, we are given poems that speak straight at us, without patronizing; the pain gives us claritas of being this much alive. I believe Shanahan is a rare kind of poet because his voice is unrelenting and calm at once; he is both vividly empathetic and fiercely honest. The poems in this powerful book dare to see themselves (and us) clearly in this night.”—Ilya Kaminsky, Whiting Award–winning author of Dancing in Odessa

Charif Shanahan was born in the Bronx in 1983 to an Irish-American father and a Moroccan mother. He holds an MFA in poetry from New York University. His poems have appeared in Baffler, Boston Review, Callaloo, Literary Hub, New Republic, Poetry International, Prairie Schooner, and elsewhere. He has received awards and fellowships from the Academy of American Poets, Cave Canem, the Frost Place, the Fulbright Program, the Millay Colony for the Arts, and Stanford University, where he is a Wallace Stegner Fellow in Poetry.