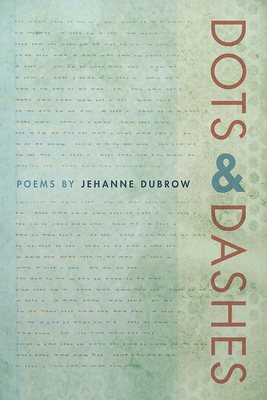 Moving between the languages of love and war, Jehanne Dubrow’s latest book offers valuable testimony to the experiences of military wives. Frequently employing rhyme, meter, and traditional forms, these poems examine what it means to be both a military spouse and an academic, straddling two communities that speak in very different and often conflicting terms.

As in the poet’s earlier collection, Stateside, the poems in Dots & Dashes are explicitly feminist, exploring the experiences of women whose husbands are deployed. But, while Stateside looked to masculine stories of war, Dots & Dashes incorporates the views and voices of female poets who have written about combat. Looking to Sappho and Emily Dickinson, the poet considers how the act of writing allows her autonomy and agency rarely granted to military spouses, even in the twenty-first century. Dubrow catalogs the domestic life of a military spouse, illustrating what it is like to live in a tightly constructed world of rules and regulations, ceremony and tradition, where “every sacrifice already / knows its place.”

Navigating the rough seas of marriage alongside questions about how civilians and those in the military can learn to communicate with one another, Dubrow argues for compassion and empathy on both sides. In this timely collection, Dubrow offers the hope that if we can break apart our preconceptions and stereotypes, we can find what connects all of us.

Jehanne Dubrow is the author of five poetry collections, including The Arranged Marriage, Red Army Red, Stateside, From the Fever-World, and The Hardship Post. Her poems, creative nonfiction, and book reviews have appeared in the Southern Review, New York Times Magazine, and Hudson Review, among others. She has received a number of awards and fellowships, including the Alice Fay Di Castagnola Award and two fellowships from the Sewanee Writers’ Conference. She is an associate professor at the University of North Texas.

“With Dots & Dashes, Jehanne Dubrow gives us a panoramic view of the landscape of marriage within the structure and confines of military life. This difficult and layered collection refuses to avert its gaze from trouble in all its overt and nuanced forms. While these poems offer glimpses into an often closed-off world, the core experiences within these poems don’t reside on military bases and in military life alone. Dots & Dashes is a series of messages called out over the waters of a life—isolation, separation, the silences and failures of communication—a reminder that sailors are not always the ones who are lost at sea.”—Brian Turner, author of Phantom Noise and Here, Bullet

“Jehanne Dubrow’s newest collection, Dots & Dashes, masterfully plays with the military’s attempts at simplifying and standardizing information. With an agility of language that is both intimate and far-gazing, Dubrow examines the difficulty of communication between man and woman, military and civilian, service member and academic. This exploration of relationships is written with the intensity and honesty that makes Dubrow one of our greatest poets, and the brilliance of Dots & Dashes reads loud and clear.”—Siobhan Fallon, author of You Know When the Men Are Gone

“In her new book, Jehanne Dubrow’s poems are simultaneously so raw and well-made, so elemental and sophisticated, as to seem almost operatic in their reach and power. One thing that she restores to poetry is the premodern, particularly ancient Greek, sense of the insistent link between armaments and warriors on the one hand and Eros on the other. Her poems, nevertheless, are firmly contemporary with their modern naval references, but her colloquy with other authors—there’s a lovely poem on Jane Austen’s Persuasion for example—gives them a sobering and timeless ‘’twas ever thus’ feel. And not the least of its charms is that the book can be read as one long, lyrical, involved, and self-aware love poem (I doubt the word husband appears so many times, and with such varied emphases, in any other recent poetry book of comparable quality). A wonderful read!”—Dick Davis, author of At Home, and Far from Home: Poems on Iran and Persian Culture

"The tangled conflicts that arise from the speaker's position are fascinating. Within the confines of their marriage, she objects to the way that her husband's uniform seems to dehumanize him. Viewing military culture through this critical lens is something commonly acceptable in her identity as a poet but quite taboo in her identity as a military spouse."--Catalina Righter, The Summerset Review