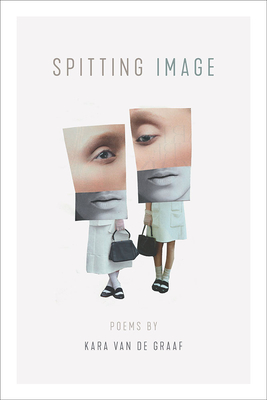 Kara van de Graaf’s debut collection heralds the arrival of an essential new voice in contemporary poetry. Through poems that balance personal recollection with ekphrasis, science, and meditation, Van de Graaf searches for answers in the fluctuating relationship between the body and the self.

Taking as its primary theme the exploration of the female body in current culture, Spitting Image considers the myriad intersections of the body and gender, desire, relationships, and otherness. Van de Graaf interrogates underrepresented elements of the female experience, especially the physical, rhetorical, and aesthetic limitations of fatness in poetry and other arts. She then complicates those limitations through her use of innovative forms and imaginative verse, implicitly calling for poetry to engage with the female form in fresh ways. Throughout, Van de Graaf’s poems ask: In a time where we have more agency to define ourselves than ever before, what barriers still remain? What do our bodies mean to who we are?

At turns oblique and direct, Van de Graaf’s poems strive to create space for themselves not only in the field of contemporary poetry but also in a larger world that has been prone to ignoring or shaming women for their bodies. That these poems succeed on both counts is a testament to this remarkable new poet, who claims “That millimeter of space that means / all of us are apart, that means / we can never really touch / anything. . . . Yes, I want that, too.”

Kara van de Graaf is the recipient of the Hoepfner Literary Award and a Tennessee Williams Scholarship from Sewanee Writers’ Conference, among other honors. Her poems have appeared in AGNI, New England Review, Southern Review, Crazyhorse, and Best New Poets 2010. She is a cofounder and an editor of Lightbox Poetry and an assistant professor of English at Utah Valley University.

“‘Things keep happening,’ Kara van de Graaf begins with her fine careful eye and ear on the large and the small—just sewing a seam as someone scrubs potatoes in the next room. Then it’s to deeper mysteries rendered strange. Suddenly, we never saw them before!—crow and horsefly, the ant colony’s queen (‘how many times /she had labored to repeat herself’), the giant sequoias, sunfish, whale (‘you patron saint / of taking up space’), starlings, dark wheeling flocks of them. And always the body fascinates and troubles, at home or in spaceflight where the astronaut’s bones keep ‘hollowing / at their center.’ Treasure this poet, her close and her far.”—Marianne Boruch, author of Eventually One Dreams the Real Thing

“Shame is the loneliest of the emotions, and one that must be taught. Van de Graaf’s book is the pained, graceful unfurling of such shame, with the despised body as its locale. Paradox is wise but fraught, and both states abound in this gorgeous, refined book. Spitting Image joins the library of crucial books on how we learn to hate ourselves, and who it was who taught us. Yet it is more than that—it is wisdom literature, a voice extending past each deceiving thing.”—Katie Ford, author of Blood Lyrics

“When the arrow hits the bull’s-eye, we marvel at the precision and skill of the archer. Kara van de Graaf’s debut collection, Spitting Image, is such a skilled and powerful book. These poems behold the human form and know ‘our flesh is never / our flesh alone.’ This poet is the archer, the arrow, and the flight. She sees and sings to us, and her candor and her tenderness make this book a triumph.”—Steve Scafidi, author of To the Bramble and the Briar

“These poems are exquisite, vivacious to the eye and ear. But the beauty of these poems is always in tension with their dark thematic cargo: the body’s vulnerability, the body’s ardor and hunger, and the complex legacies that a person bears. Spitting Image is a book of pain, but it is also a book of canny grace. As the speaker in one poem knowingly says, ‘Forgive me, I must say everything twice: / once to punish, once to entice.’ And here van de Graaf exemplifies still another definition of craft—craft as cunning.”—Rick Barot, author of Chord