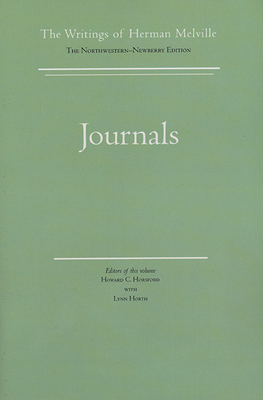 This volume presents Melville's three known journals. Unlike his contemporaries Emerson, Thoreau, and Hawthorne, Melville kept no habitual record of his days and thoughts; each of his three journals records his actions and observations on trips far from home. In this edition's Historical Note, Howard C. Horsford places each of the journals in the context of Melville's career, discusses its general character, and points out the later literary uses he made of it, notably in Moby-Dick, Clarel, and his magazine pieces.

The editors supply full annotations of Melville's allusions and terse entries and an exhaustive index makes available the range of his acquaintance with people, places, and works of art. Also included are related documents, illustrations, maps, and many pages and passages reproduced from the journals. This scholarly edition aims to present a text as close to the author's intention as his difficult handwriting permits. It is an Approved Text of the Center for Editions of American Authors (Modern Language Association of America).

Herman Melville (August 1, 1819 – September 28, 1891) was an American novelist, short story writer, essayist, and poet. He is best known for his novel Moby-Dick. His first three books gained much contemporary attention (the first, Typee, becoming a bestseller), and after a fast-blooming literary success in the late 1840s, his popularity declined precipitously in the mid-1850s and never recovered during his lifetime. When he died in 1891, he was almost completely forgotten. It was not until the "Melville Revival" in the early 20th century that his work won recognition, especially Moby-Dick, which was hailed as one of the literary masterpieces of both American and world literature. He was the first writer to have his works collected and published by the Library of America.