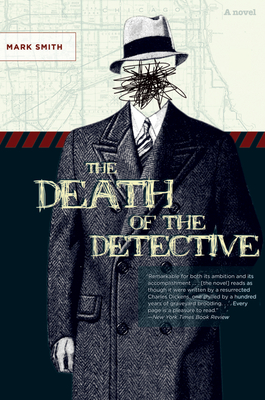 The Death of the Detective

A madman is on the loose in the city. Alone and on the verge of psychic collapse, detective Arnold Magnuson follows clues in murder's wake--through the Chicago of society clubs and nightclubs and the city of small-time hoods and big-time Mafia, the slums smelling of machine oil and riverside tanneries and pristine lakeside villages--through subtle interrogations, split-second lies, and improvised stories, moving ever closer to a culprit who begins to feel alarmingly like himself.

The Death of the Detective is a quest novel in the tradition of Don Quixote, Moby-Dick, and Dead Souls. During his frenetic and blood-soaked odyssey, Mark Smith's detective moves through the city on highways, boulevards, side streets, and alleys. He tracks "the death-maker" from a mansion in Lake Forest to the underbelly of the South Side, from a glass high-rise on the Gold Coast to a run-down tavern in the northwestern suburbs, and everywhere in between. In this New York Times best seller and finalist for the 1974 National Book Award, Smith takes hold of the reader and doesn't let go until the last page of his relentless journey into the dark recesses of the American soul.

Praise For The Death of the Detective: A Novel…

"Remarkable for both its ambition and its accomplishment, [it] reads as though it were written by a resurrected Charles Dickens, one chilled by a hundred years of graveyard brooding. . .every page is a pleasure to read." --<i>New York Times Book Review</i>


"<i>The Death of the Detective</i> is not only about Chicago, it is Chicago. . . . With this one enormous book Mark Smith has emerged as one of the most ambitious, original, and thought-provoking novelists writing today." --<i>Chicago Daily News</i>

Mark Smith was born in Michigan in 1935 and lived in Chicago, Illinois for many years. He is the author of seven novels, a poet, and a professor emeritus of English at the University of New Hampshire.
Loading...
or
Not Currently Available for Direct Purchase