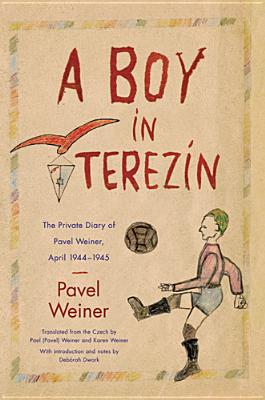 A Boy in Terezín

Written by a Czech Jewish boy, A Boy in Terezín covers a year of Pavel Weiner's life in the Theresienstadt transit camp in the Czech town of Terezín from April 1944 until liberation in April 1945.

The Germans claimed that Theresienstadt was "the town the Führer gave the Jews," and they temporarily transformed it into a Potemkin village for an International Red Cross visit in June 1944, the only Nazi camp opened to outsiders. But the Germans lied. Theresienstadt was a holding pen for Jews to be shipped east to annihilation camps.

While famous and infamous figures and historical events flit across the pages, they form the background for Pavel's life. Assigned to the now-famous Czech boys' home, L417, Pavel served as editor of the magazine Ne?ar. Relationships, sports, the quest for food, and a determination to continue their education dominate the boys' lives. Pavel's father and brother were deported in September 1944; he turned thirteen (the age for his bar mitzvah) in November of that year, and he grew in his ability to express his observations and reflect on them. A Boy in Terezín registers the young boy's insights, hopes, and fears and recounts a passage into maturity during the most horrifying of times.

Pavel Weiner (1931-2010) was born in Prague in November 1931. His diary lays bare the maturation of a twelve-year-old boy through the horrors of the German's "model camp," Theresienstadt.