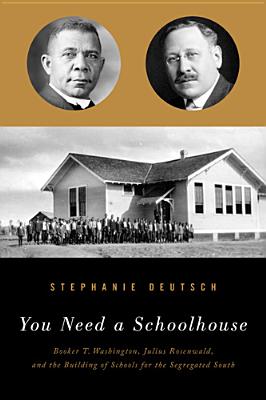 You Need a Schoolhouse

Booker T. Washington, Julius Rosenwald, and the Building of Schools for the Segregated South

Booker T. Washington, the founder of Tuskegee Institute, and Julius Rosenwald, the president of Sears, Roebuck, and Company, first met in 1911 at a Chicago luncheon. By charting the lives of these two men both before and after the meeting, Stephanie Deutsch offers a fascinating glimpse into the partnership that would bring thousands of modern schoolhouses to African American communities in the rural South in the era leading up to the civil rights movement. Trim and vital at just shy of fifty, Rosenwald was the extraordinarily rich chairman of one of the nation’s largest businesses, interested in using his fortune to do good not just in his own Jewish community but also to promote the well-being of African Americans.

Washington, though widely admired, had weathered severe crises both public and private in his fifty-six years. He had dined with President Theodore Roosevelt and drunk tea with Queen Victoria, but he had also been assaulted on a street in New York City. He had suffered personal heartbreak, years of overwork, and the discouraging knowledge that, despite his optimism and considerable success, conditions for African Americans were not improving as he had assumed they would. From within his own community, Washington faced the bitter charge of accommodationism that haunts his legacy to this day. Despite their differences, the two men would work together well and their collaboration would lead to the building of five thousand schoolhouses. By the time segregation ended, the “Rosenwald Schools” that sprang from this unlikely partnership were educating one third of the South’s African American children. These schoolhouses represent a significant step in the ongoing endeavor to bring high quality education to every child in the United States—an ideal that remains to be realized even today.

STEPHANIE DEUTSCH is a writer and critic living in Washington, DC. She has written for The New York Times, The Weekly Standard, The Millions blog and various neighborhood newspapers.  She edited and wrote the Introduction to Capitol Hill: Beyond the Monuments, a book of photographs published in 1996 by the Capitol Hill Arts Workshop.