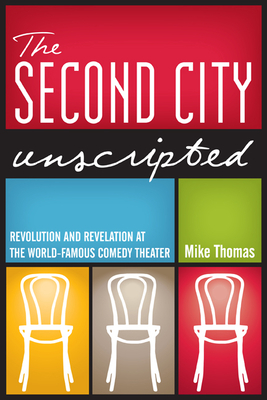 Revolution and Revelation at the World-Famous Comedy Theater

Since its modest beginning in 1959, The Second City in Chicago has become a world-renowned bastion of hilarity. A training ground for many of today’s top comedic talents—including Alan Arkin, Dan Aykroyd, Stephen Colbert, Tina Fey, Bill Murray, and Amy Sedaris— it was an early blueprint for improv-based sketch revues in North America and abroad. Its immeasurable influence also extends to television, film, and the Broadway stage. Mike Thomas interviewed scores of key figures who have contributed to Second City’s vast legacy —its stars as well as those who worked and continue to work behind the scenes—to create this entertaining and informative oral history. The story is equal parts legendary highlights, gossip, and insight into how the theater’s brand of comedy was and is created. Unprecedented in scope and rife with colorful tales well told, The Second City Unscripted is an essential account of this iconic show business institution.


Praise For The Second City Unscripted: Revolution and Revelation at the World-Famous Comedy Theater…

“His top-notch lineup of comedian . . . upholds a bedrock law of improv: never try to be funny. Much of the humor here emerges naturally, as it should. Thomas carves his interviews into snippets, grouping them by topic; when things gel, it’s like listening to these people swap stories on grungy backstage couches.” —Lynn Harris, New York Times

“A winning collection for any fan of comedy’s last half-century.”—Publishers Weekly

“Mike Thomas . . . does a wonderful job with an impossible task: capturing that lightning-in-a-bottle quality of Second City, from its humble origins to its current status as a comedy institution.”—Julia Keller, Chicago Tribune

Mike Thomas is a staff writer for the Chicago Sun-Times. He has also written for Esquire, Smithsonian, and Salon.com.