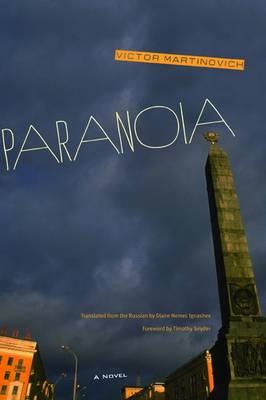 Immediately banned after it was published, Paranoia is a novel about how dictatorships survive by burrowing into the minds of those they rule, sowing distrust and blurring the boundaries between the state’s and the individual’s autonomy. Although Minsk and Belarus are never mentioned, they are clearly the author’s inspiration for the novel’s setting. The plot focuses on a doomed romance between a young man whose former lover has disappeared and a young woman whose other lover is the minister of state security. The novel evokes classic dissident literature while artfully depicting the post-Soviet, globalized world.


Praise For Paranoia: A Novel…

"Victor Martinovich is a funny writer . . . the novel is as hilarious a send up of modern Belorussian tyranny as one can expect. Why is probably why the book was banned upon its release and Martinovich is now living in exile." —Russian Life

VICTOR MARTINOVICH is a deputy editor of BelGazeta, a Belarusian weekly newspaper, and the dean of the Faculty of Politics at the European Humanities University, a Belarusian institution closed by the authorities in 2004 and now based in Vilnius, Lithuania.

DIANE NEMEC IGNASHEV is Class of 1941 Professor of Russian and the Liberal Arts at Carleton College in Minnesota and the translator of No Love Without Poetry: The Memoirs of Marina Tsvetaeva’s Daughter by Ariadna Efron (Northwestern, 2009).