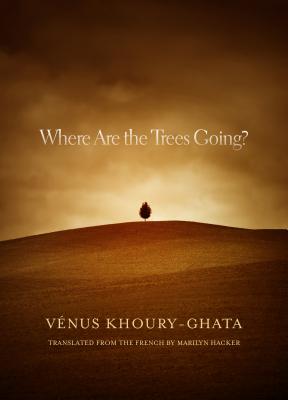 Where Are the Trees Going?

Where Are the Trees Going? brings together some of the latest work of the poet and novelist Venus Khoury-Ghata in a manner that showcases her central concerns in a wholly novel and provocative format. Renowned translator Marilyn Hacker interleaves a full translation of Khoury-Ghata’s volume of poetry Où vont les arbres.with prose from La maison aux orties. The resulting interplay illuminates the poet’s contrasting and complementary drives toward surreal lyricism and stark narrative exposition.

Khoury-Ghata takes on perennial themes of womanhood, immigration, and cultural conflict. Characters take root in her memory as weathered trees and garden plants, lending grit and body to the imaginative collection. As bracing as the turn of seasons, Where Are the Trees Going? highlights a writer who has approached her most recent work with renewed urgency and maturity.


Praise For Where Are the Trees Going?…

"Vénus Khoury-Ghata transforms memory into myth in this magical, heartbreaking book of longing and dislocation.  Where Are the Trees Going?, which Marilyn Hacker has so vividly translated into English, expands and enlarges our world, our imagination." —Edward Hirsch

"Venus Khoury-Ghata’s poetry in Marilyn Hacker's excellent translation grants us entry to a fierce, surreal world where mothers and trees, birds and stones, indeed flesh in its multifoliate forms coheres and splits into exquisite words, reclaiming a spiritual homeland, a mythic stay against chaos." —Meena Alexander, Author of Birthplace with Buried Stones

"Taken together, these stunning, at times surrealistic poems amount to an elegy of survival that takes the reader to new ontological depths." —World Literature Today

Vénus Khoury-Ghata is a Lebanese poet and novelist, resident in France since 1973, author of twenty-four novels and twenty collections of poems, translated into German, Arabic, Swedish, and other languages. Her most recent collection to appear in English, Nettles (2008), was also translated by Marilyn Hacker. Her awards include the Goncourt Prize for Poetry for Où vont les arbres. She is an Officier of the French Legion of Honor.

Marilyn Hacker is the author of twelve collections of poems and twenty translations of books of poems from the French. She received the PEN Voelcker Award for her own work in 2010, and the PEN Award for Poetry in Translation for King of a Hundred Horsemen by Marie Étienne in 2009.