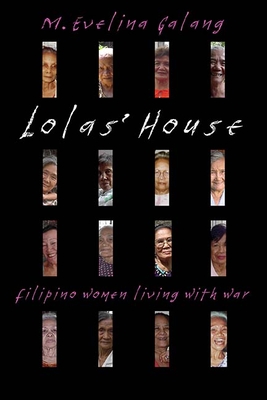 M. Evelina Galang enters into the lives of the women at Lolas’ House, a community center in metro Manila. She accompanies them to the sites of their abduction and protests with them at the gates of the Japanese embassy. Each woman gives her testimony, and even though the women relive their horror at each telling, they offer their stories so that no woman anywhere should suffer wartime rape and torture.

Lolas’ House is a book of testimony, but it is also a book of witness, of survival, and of the female body. Intensely personal and globally political, it is the legacy of Lolas’ House to the world.

“Lolas’ House is the last stand of women who survived the kidnapping and rape that was Japanese army strategy in World War II. Courageous, aged grandmothers tell their stories and show their wounded bodies to M. Evelina Galang as evidence that these crimes occurred.” —Maxine Hong Kingston, author of The Woman Warrior: Memoirs of a Girlhood among Ghosts

"A riveting work of profound historical importance, Lolas' House gives lasting voice to the Filipino comfort women—these perishing victims of the Japanese Imperial Army of WW II who wait still for an apology from Japan. This is M. Evelina Galang at her courageous, literary best." —Andrew X. Pham, author of Catfish and Mandala and The Eaves of Heaven
“The strength, courage and perseverance of these women is, truthfully, sort of life changing. Crimes against women are still under-reported and often go unrecognised. This is a book that shines a light in a dark place.” —Aisling Twomey, Book Riot

“Lolas’ House puts luminous human faces on the dehumanizing wartime statistics of Filipino ‘comfort women,’ whose stories we must allow to enter our bodies. It is in letting our tears flow and our hearts break that we also share the lolas’ pleas for all wars to end.” —Leny Mendoza Strobel, editor of Babaylan: Filipinos and the Call of the Indigenous

“An extraordinary book, Lolas’ House will historically endure as a beautifully written record of collective survival and struggle among women against male sexual violence.” —Caroline Norma, coauthor of The Japanese Comfort Women and Sexual Slavery during the China and Pacific Wars

"In her fourth and most stunning book, Lolas’ House: Filipino Women Living With War, M. Evelina Galang unwaveringly records the full-bodied lives, the heartbreaks, and the resilience of sixteen comfort women from the Philippines during World War II. The stories of the lolas’ survival and their love of living and others bring about the commanding power of who the women are. Their stories are huwes de kutsilyo—justice by knife. Remember their stories. Let them knife, split, open you up—and with mercy, let them enter your bodies, so that we may never forget."  —Melissa Sipin, Hyphen magazine

"...while the book may be a tough one to get through, it's also a necessary one—especially for the healing of these brave women who survived a devastating national trauma." —Shondaland.com

"When I first heard M. Evelina Galang read these stories the Lolas came to me through her words. This book is not just an act of collecting a documentation of history painfully revealed, but a poetry of personalities with all the textures of intellect, outrage, sadness, anger, resilience and love. This work is a monument to the Lolas and to the power of their protest; it is their message to the world about how to be truly human. M. Evelina Galang brings us into the Lolas' House, and we feel them in our hearts." —Johanna Poethig, Artist and Professor of Painting and Public Art at California State University, Monterey Bay

"M. Evelina Galang contributes powerful evidence for a war crime that has been structurally overlooked and downplayed. And most importantly: she gives the Filipina victims a powerful voice." —Griselda Molemans, investigative reporter
"Galang dances, literally dances, around the main narrative of testimony. She dances with her dalagas and with the lolas, and tells us so. Despite their pain, there is still joy in the lolas’ world. And in providing relief for themselves, they provide relief to the reader so that we can push on through their testimonies. So that we right the wrong. So we see justice done. Lolas’ House is the first collection of direct personal testimonies from Filipina survivors to join the canon of comfort woman literature... Now, with Galang’s important contribution, the lolas’ voices are on record. The lolas are now dying in their old age, but with Lolas’ House, Galang ensures their stories stay alive by recording them in history." —Christine Hyung-Oak Lee, Miami Rail

"These are important stories that need to be told... The raw first-person accounts are by far the strongest pieces of the book. The book is a reminder that it is difficult to heal without airing your story of pain and survival, and those stories are not simple." —Rebellious magazine

M. EVELINA GALANG has been researching and documenting the lives of surviving Filipino “comfort women” since 1999. She is the author of several books and the editor of Screaming Monkeys: Critiques of Asian American Images. Galang directs the M.F.A. Creative Writing Program at the University of Miami and is core faculty and board member of Voices of Our Nations Arts Foundation (VONA).
Loading...
or support indie stores by buying on