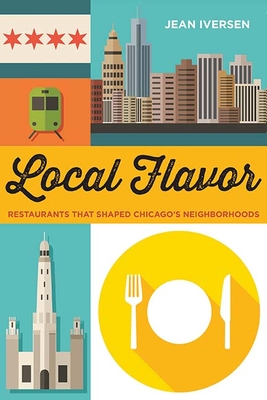 Restaurants That Shaped Chicago’s Neighborhoods (Second to None: Chicago Stories)

The neighborhoods that make up Chicago’s rich cultural landscape have been defined by the restaurants that anchor them. In Local Flavor, the popular food writer Jean Iversen chronicles eight beloved local eateries, from Chinatown on the South Side to Rogers Park in the far North, tracing the story of how they became neighborhood institutions.

Iversen has meticulously gathered the tales, recipes, and cultural traditions that define Chicago’s culinary past and present. Rich with firsthand accounts from local restaurateurs, their families, long-time customers, and staff, Local Flavor is a community-driven look at Chicago through a gastronomical lens.

Including recipes for popular dishes from each restaurant that readers can try at home, Local Flavor weaves together ethnography, family, and food history into a story that will enthrall both food and Chicago history lovers.

“Local Flavor is a love letter to some of Chicago’s legendary restaurants; profiling half a dozen places that have been in business for at least 20 years. Some, like Tufano’s Vernon Park Tap, have been chugging away for more than 80 years—a remarkable achievement for any business. Beginning in Chinatown, at Won Kow, and weaving through the city’s neighborhoods, Iversen sits down with the owners, matriarchs, founders and other key personnel, and details their family history. This book gave me a much better idea of how these immigration waves created the neighborhoods as they are today—a key part of the Chicago experience. This would be a perfect gift for anyone who loves this city and its many neighborhoods as much as I do, and has made each of these places a part of their lives over the years.” —Steve Dolinsky, “The Hungry Hound,” food reporter for ABC 7

"... for those who truly want to taste the flavors of Chicago, Iversen’s book would rank pretty high, in my opinion." —Forbes

"Long before there were tasting menus and molecular gastronomy, there were old-school Chicago restaurants, and Jean Iversen does them proud in her book. Anyone who cherishes Chicago’s rich multicultural history will enjoy this book. It’s a love letter to Chicago told through food." —Jan Parr, Crain's Chicago Business

"This well-researched and fascinating paean to Chicago’s 'ethnic cuisine' profiles the proprietors and founders of eight iconic Chicago restaurants. But it’s more than a tour of Chicago’s vibrant restaurant scene; it’s a history of American immigration and the enormous and beneficial impact immigrants have had on our culinary culture." —Colleen Taylor Sen, author of Feasts and Fasts: A History of Food in India and coeditor of The Chicago Food Encyclopedia

JEAN IVERSEN is the author of BYOB Chicago, a resource for Chicago’s dining community. She has written for publications including Crain’s Chicago Business, Time Out Chicago, and the Daily Herald.
Loading...
or
Not Currently Available for Direct Purchase