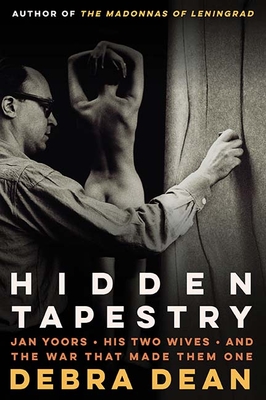 Jan Yoors, His Two Wives, and the War That Made Them One

Hidden Tapestry reveals the unforgettable story of Flemish American artist Jan Yoors—childhood vagabond, wartime Resistance fighter, and polyamorous New York bohemian. At the peak of his fame in the 1970s, Yoors’s photographs and vast tapestries inspired a dedicated following in his adopted Manhattan and earned him international acclaim. Though his intimate friends guessed the rough outline of his colorful life, Hidden Tapestry is first to detail his astonishing secrets.

At twelve, Jan’s life took an extraordinary and unexpected turn when, lured by stories of Gypsies, he wandered off with a group of Roma and continued to live on-and-off with them and with his own family for several years. As an adult in German-occupied France, Yoors joined the Resistance and persuaded his adoptive Roma family to fight alongside him. Defying repeated arrests and torture by the Gestapo, he worked first as a saboteur and later escorted Allied soldiers trapped behind German lines across the Pyrenees to freedom.

After the war, he married childhood friend Annabert van Wettum and embarked on his career as an artist. When a friend of Annabert’s, Marianne Citroen, modeled for Yoors, the two began an affair, which led the three to form a polyamorous family that would last for the rest of their lives. Moving to New York, the trio became part of the bohemian life of Greenwich Village in the 1950s.

Told in arresting detail by Debra Dean, best-selling author of The Madonnas of Leningrad, Yoors’s story is a luminous and inspiring account of resilience, resourcefulness, and love.

DEBRA DEAN is the best-selling author of a short-story collection and two novels, The Mirrored World and The Madonnas of Leningrad—the latter a New York Times Editors’ Choice and #1 Booksense Pick. She lives in Miami and teaches at Florida International University.

Praise For Hidden Tapestry: Jan Yoors, His Two Wives, and the War That Made Them One…

“Debra Dean has written that unique book that is scholarly, historically important, well researched, relevant to the art world as well as the academic and general population, full of vibrant and fascinating characters, beautifully written, and somehow—almost improbably—true.” —Ann Hood, author of The Books That Matter Most and An Italian Wife

"Her riveting descriptions breathe life into events that many of us are familiar with. Like an artful documentarian, Dean whisks us from the panorama of wartime to close-ups of our main characters, each trying to survive. Because of Dean’s ability to balance the narrative, I found myself caught up in each of their lives, wondering how the three would come together." —Washington Independent Review of Books

"In Hidden Tapestry, Debra Dean dives into the artist’s singular backstory and the equally compelling stories of his wives, Annabert van Wettum and Marianne Citroen. This is a well-researched, well-written, and unusual biography... There's a fascinating story here, and Dean tells it well."—Foreword Reviews

"There is much of interest in this book for contemporary tapestry weavers. Bottom line: read this book. I loved it and I will definitely be spending more time learning about Jan Yoors with special interest in his wives and weavers, Marianne and Annabert." —Rebecca Mezoff, Rebeccamezoff.com

"Debra Dean puts the stitches in the rich tapestry that was Jan Yoors’s life, surely one of the most remarkable artistic stories of the twentieth century. She reveals his incredible life of exploration, adventure, and heroism, as well as his truly unique ménage. I’m hugely impressed with her research and writing—and green with envy that she found such a fascinating subject to write about.” –Ross King, author of Mad Enchantment: Claude Monet and the Painting of the Water Lilies

“It is a worthwhile read, very thought-provoking, the kind of book that stays with you long after reading the last page.”—Story Circle Book Reviews

“It’s rare when an extraordinary artist wins a biographer of equal quality. As someone who admired Jan Yoors greatly and once spent a few days in his unusual household, I’m delighted to see this story told with grace, with careful research, and with such compassion for the women who were an invisible part of his work.” –Adam Hochschild, author of Half the Way Home: A Memoir of Father and Son

"This book is making the rounds in tapestry circles, and it's easy to see why.  It is a compulsively readable account of a fascinating man and his impact on his family, friends and the world of tapestry, through World War II and into the mid-century New York art world.  While tapestry artists will find it especially interesting to get a behind-the-scenes look at Jan Yoors's life, even readers with no particular interest in tapestry will find the story compelling. I do urge you to get your hands on a copy... It's a great read, and if you are a weaver, it is thought-provoking and informative." –Molly Elkind, Talking Textiles