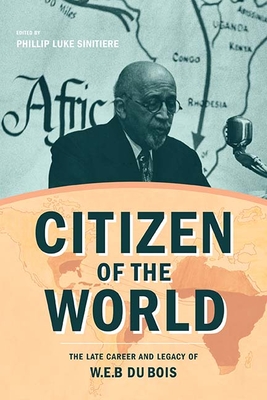 Citizen of the World

The Late Career and Legacy of W. E. B. Du Bois (Critical Insurgencies)

In his 1952 book In Battle for Peace, published when W. E. B. Du Bois was eighty-three years old, the brilliant black scholar announced that he was a “citizen of the world.” Citizen of the World chronicles selected chapters of Du Bois’s final three decades between the 1930s and 1960s. It maps his extraordinarily active and productive latter years to social, cultural, and political transformations across the globe.

From his birth in 1868 until his death in 1963, Du Bois sought the liberation of black people in the United States and across the world through intellectual and political labor. His tireless efforts documented and demonstrated connections between freedom for African-descended people abroad and black freedom at home.

In concert with growing scholarship on his twilight years, the essays in this volume assert the fundamental importance of considering Du Bois’s later decades not as a life in decline that descended into blind ideological allegiance to socialism and communism but as the life of a productive, generative intellectual who responded rationally, imaginatively, and radically to massive mid-century changes around the world, and who remained committed to freedom’s realization until his final hour.

Praise For Citizen of the World: The Late Career and Legacy of W. E. B. Du Bois (Critical Insurgencies)…

“There is no existing overall counterpart [to this volume]; its time has come, the time for new scholarship on the latter part of W. E. B. Du Bois’ itinerary.” —Nahum Chandler, editor of W. E. B. Du Bois’s The Problem of the Color Line at the Turn of the Twentieth Century: The Essential Early Essays


"This is a thoughtful collection of intertextual and cohesive essays that draw on an impressive array of rare primary sources and archival documents and that offer nuanced and unique interpretations of the 'late Du Bois.'" —Charisse Burden-Stelly, The Journal of African American History

PHILLIP LUKE SINITIERE is a professor of history at the College of Biblical Studies in Houston. He is the author of Salvation with a Smile: Joel Osteen, Lakewood Church, and American Christianity and the coeditor of Protest and Propaganda: W. E. B. Du Bois, the “Crisis,” and American History and Christians and the Color Line: Race and Religion after “Divided by Faith.”