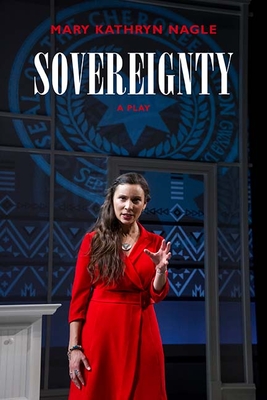 Sovereignty unfolds over two parallel timelines. In present-day Oklahoma, a young Cherokee lawyer, Sarah Ridge Polson, and her colleague Jim Ross defend the inherent jurisdiction of Cherokee Nation in the U.S. Supreme Court when a non-Indian defendant challenges the Nation’s authority to prosecute non-Indian perpetrators of domestic violence. Their collaboration is juxtaposed with scenes from 1835, when Cherokee Nation was eight hundred miles to the east in the southern Appalachians. That year, Sarah’s and Jim’s ancestors, historic Cherokee rivals, were bitterly divided over a proposed treaty with the administration of Andrew Jackson, the Treaty of New Echota, which led to the nation’s removal to Oklahoma on the infamous Trail of Tears.

A direct descendant of nineteenth-century Cherokee leaders John Ridge and Major Ridge, Mary Kathryn Nagle has penned a play that twists and turns from violent outbursts to healing monologues, illuminating a provocative double meaning for the sovereignty of both tribal territory and women’s bodies. Taking as its point of departure the story of one lawyer’s passionate defense of the rights of her people to prosecute non-natives who commit crimes on reservations, Sovereignty opens up into an expansive exploration of the circular continuity of history, human memory, and the power of human relationships.


Praise For Sovereignty: A Play…

“The parallels between the past and present in this play are beautiful and heart-wrenching, often at the same time. It unpacks this world of dualities—Cherokee and White, past and future, Ross and Ridge. It’s an amazing journey.” —Maryland Theater Guide

". . . one of the most necessary plays ever written." —Ryan Winn, Tribal College: Journal of American Indian Higher Education

MARY KATHRYN NAGLE is an enrolled citizen of the Cherokee Nation. Her play Sliver of a Full Moon has been performed at law schools across the United States, and she has received commissions from Arena Stage, the Rose Theater, Portland Center Stage, Denver Center for the Performing Arts, Yale Repertory Theatre, Round House Theatre, and the Oregon Shakespeare Festival. She served as the first executive director of the Yale Indigenous Performing Arts Program from 2015 to 2019. Nagle is also a partner at Pipestem Law, P.C., where she works to protect tribal sovereignty and the inherent right of Indian Nations to protect their women and children from domestic violence and sexual assault. She has authored numerous briefs in federal appellate courts, including the United States Supreme Court.
Loading...
or support indie stores by buying on