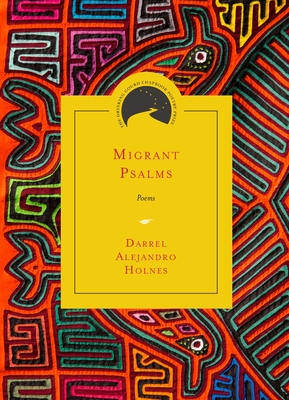 Migrant Psalms prays for a way to make sense of immigration to the United States—now that we realize the American Dream was always an impossible one. Both reverent and daring, this verse interrogates religion, race, class, family, and sexuality. Written as a call to action, the collection pulls together prayer, popular culture, and technology to tell a twenty‑first-century migrant story.

Migrant Psalms gives us a rare look inside a Panamanian experience of migration, describing the harsh realities of mothers, children, and teens who entered the United States—or tried to do so. Holnes’s poems find the universal through specificity; their exploration of expatriation, assimilation, and naturalization transcends the author’s personal experience to speak to what it means to be “other” anywhere.

The collection begins with “Kyrie,” a coming‑to‑America chronicle that spans three years in Texas, modeled after the liturgical Christian prayer Kyrie Eleison (Lord, have mercy). Other poems experiment with macaronic language and form to parallel shifts in the speaker’s status from immigrant to citizen, ending with “The 21st Century Poem,” which probes what’s “real” in today’s New York City. Through the speaker’s quest to become an American, this collection asks: Who are we becoming as individuals, as a society, as a nation, as a world? And is faith enough to enact change? Or is it just the first step?

"['OTM'] transcends the list poem so far as to create its own unique form. This is the form of all of Darrel Alejandro Holnes’s work. The conclusion of his poem 'Poder' describes and defines this original form: 'moving us farther and farther / away from the world being just rhetoric, / into the structure of its design . . . / knowing this too is poetry.' Reader, this is poetry." —Ed Roberson, from the introduction

"Darrel Alejandro Holnes captures beautifully the deep investment in hope (and in the divine) that immigrants must make, and the deeper investment in themselves that fuels their hope. And with vibrant images, compelling narratives, and witty and affective turns of phrase, he sings the ambivalence of arrival and the shifting blues of self-making. Migrant Psalms is a wise and soulful debut, a gem of a book." —Khaled Mattawa, author of Fugitive Atlas: Poems

“Darrel Alejandro Holnes sings with holy irreverence. His lyricism transforms the dashed pottery of a Jeremiah into the broken windows that show us a wilder world is still possible. These are love poems to the present—earnest, earthy, unpredictable. His migrant tongue shows us why we need to read in the presence of all the languages of the world. Here is a voice that has arrived, just in time for these times.” —Tsitsi Jaji, author of Mother Tongues: Poems (Northwestern University Press, 2020)

DARREL ALEJANDRO HOLNES is the recipient of a National Endowment for the Arts Literature Fellowship in Creative Writing (Poetry). His poems have previously appeared in the American Poetry Review, Poetry magazine, Callaloo, Best American Experimental Writing, and elsewhere. Holnes is a Cave Canem and CantoMundo fellow who has earned scholarships to the Bread Loaf Writers’ Conference, Fine Arts Work Center in Provincetown, Postgraduate Writers Conference at Vermont College of Fine Arts, and residencies nationwide, including a residency at MacDowell. His poem “Praise Song for My Mutilated World” won the C. P. Cavafy Poetry Prize from Poetry International. He is an assistant professor of English at Medgar Evers College, a senior college of the City University of New York (CUNY), where he teaches creative writing and playwriting, and a faculty member of the Gallatin School of Individualized Study at New York University.
Loading...
or support indie stores by buying on
(This book is on backorder)