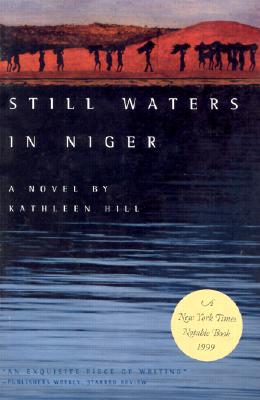 The narrator of this book is an Irish-American woman who returns to the West African country of Niger where she had lived seventeen years earlier as the wife of an academic and the mother of three young daughters. Now she is visiting her eldest daughter, Zara, who has herself returned to Africa during a season of devastating drought and is working in a village clinic that cares for women and children suffering from starvation.

Still Waters in Niger is a beautifully observed account of a return to a place at once exotic and familiar, as well as a tale of inner discovery. As the narrator reacquaints herself with her daughter and with the Africa of her past, she meets other mothers and their children. With her own memories of young motherhood strong, she becomes aware of the strikingly similar ways in which the impassioned and often difficult bonds between mothers and daughters are revealed across the divide of cultures. Hill paints a compelling portrait of a community of women grounded in kinship and care for their children, a society characterized not only by pain and exhaustion but by humor, delicacy, and strength. Filled with vivid, elegant descriptions and meditations on hunger, poverty, the desert, women, memory, and the love between mothers and daughters, Still Waters in Niger is the haunting story of a woman looking simultaneously backward and forward.


Praise For Still Waters in Niger…

"Although billed as an autobiographical novel, it reads just like a memoir: pensive, particular, and honest. 'How to speak to the silences, the spaces between?' the narrator asks. Hill . . . has had the courage and skill to do just that." --New York Times Book Review


"Although modest in plot, it is abundant in understanding." --Los Angeles Times


"A beautiful book, with great lyric power and emotional resonance. In combining her passion for her daughter with her passion for experience and to know the world, Kathleen Hill makes a great contribution to our store of information about how women live. I am full of admiration for this small miracle." --Mary Gordon

"Here is a novel of fine social and cross-cultural observation, and, too, of moral inwardness--a wonderfully knowing storyteller with a strong spiritual bent tell us so very much about idealism and its vicissitudes, parenthood and its possibilities." --Robert Coles

Kathleen Hill's fiction and essays have been published in Best American Short Stories 2000, Pushcart Prize XXV, Kenyon Review, and Prairie Schooner. The original publication of Still Waters in Niger (Northwestern,1999) was nominated for the International IMPAC Dublin Literary Award and was among the Notable Books of the Year in the New York Times, Los Angeles Times and the Chicago Tribune. A French translation of Still Waters in Niger entitled Eaux Tranquilles was published by Editions Phébus in 2000 and was shortlisted for the Prix Femina Etranger. Hill currently teaches in the Writing Program at Sarah Lawrence College and lives in New York City.
Loading...
or
Not Currently Available for Direct Purchase