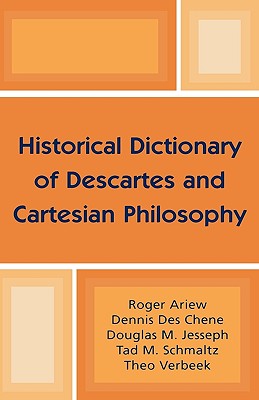 The Historical Dictionary of Descartes and Cartesian Philosophy includes many entries on Descartes's writings, concepts, and findings. Since it is historical, there are other entries on those who supported him, those who criticized him, those who corrected him, and those who together formed one of the major movements in philosophy, Cartesianism. To better understand the period, the authors drew up a brief chronology, and to see how Descartes and Cartesianism fit into the general picture, they have written an introduction and a biography. Since everything cannot be summed up in one volume, a bibliography directs readers to numerous other sources on issues of particular interest. We usually teach Modern Philosophy beginning with Ren Descartes, "the father of modern philosophy," and ending with Immanuel Kant. This typically involves a view of Modern Philosophy consisting of two distinct camps: Continental Rationalists (Descartes, Baruch Spinoza, and Gottfried Wilhelm Leibniz), who it is said emphasize reason at the expense of the senses, and British Empiricists (John Locke, George Berkeley, and David Hume), who accentuate the senses after rejecting innate ideas. Given this picture, Kant is then presented as the culminating figure of modern philosophy because of his attempt to synthesize the rationalist and empiricist traditions. While there is some truth in the simple schema we teach, its greatest deficiency is that it misses too much of the real Descartes. In the 17th century Descartes was known as well, if not more, for his achievements in mathematics, physics, cosmology, physiology, philosophical psychology, and so forth. It would be difficult to overstate the influence of Descartes over practically every aspect of 17th century thought, even over such far-flung subjects as geology and medicine. Moreover, the followers of Descartes were extraordinarily committed to their master's thought; and anti-Cartesians were just as determined to condemn Cartesianism, to refute it, to be rid of it in any way p.