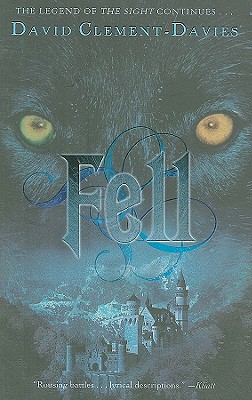 In this dark, thrilling fairy tale, it is the wolf who saves the girl. Fell, the dark-furred twin brother of Larka, the heroine of The Sight, must face life without his sister or the rest of his loving pack. He’s a lone wolf now, a “kerl,” an outcast from his kind who shares his sister’s fatal gift for seeing the future and the thoughts of others. This gift leads him to befriend a young girl, also an outcast from her people. They have a shared destiny: to free the land from a tyrannical ruler who would enslave man and animal alike.

The prequel to this book, David Clement-Davies’s bestselling animal fantasy The Sight, is set among the wolves of Transylvania. This dark epic thrilled readers and critics alike, who said, “This sprawling, ambitious novel has it all: action, adventure, apocalyptic battles” (Children’s Literature), and called it “rich, complex, and credible” (VOYA) and “full bodied [and] lyrically told” (Booklist, starred review).
F&P level: Z

David Clement-Davies is the author of several highly acclaimed and bestselling novels, including The Telling Pool and The Sight. His books have been called “intricately crafted” (The Boston Globe), “a hurtling ride” (Kirkus Reviews), and “a masterpiece” (Booklist). Young readers are equally enthralled: His Amazon.com and Barnesandnoble.com kid reviews number in the many hundreds and include such praise as “an instant classic,” “too cool for words,” and “absolutely stunning.” David travels extensively and has trekked across a desert, swum with dolphins, and skydived on assignment for various travel magazines. He lives in London.
Loading...
or
Not Currently Available for Direct Purchase