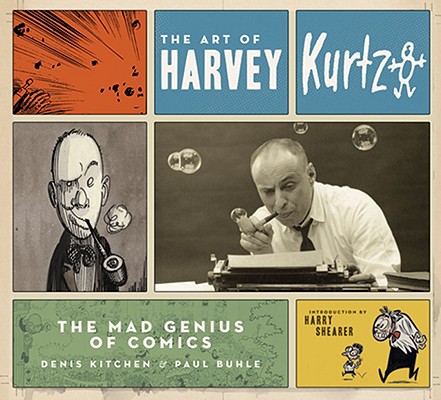 The Art of Harvey Kurtzman

The Mad Genius of Comics

Harvey Kurtzman discovered Robert Crumb and gave Gloria Steinem her first job in publishing when he hired her as his assistant. Terry Gilliam also started at his side, met an unknown John Cleese in the process, and the genesis of Monty Python was formed. Art Spiegelman has stated on record that he owes his career to him. And he's one of Playboy publisher Hugh Hefner's favorite artists.
Harvey Kurtzman had a Midas touch for talent, but was himself an astonishingly talented and influential artist, writer, editor, and satirist. The creator of MAD and Playboy's "Little Annie Fanny" was called, "One of the most important figures in postwar America" by the New York Times. Kurtzman's groundbreaking "realistic" war comics of the early '50s and various satirical publications (MAD, Trump, Humbug, and Help!) had an immense impact on popular culture, inspiring a generation of underground cartoonists. Without Kurtzman, it's unlikely we'd have had Airplane, SNL, or National Lampoon.
The Art of Harvey Kurtzman is the first and only authorized celebration of this "Master of American Comics." This definitive book includes hundreds of never-before-seen illustrations, paintings, pencil sketches, newly discovered lost E.C. Comics layouts, color compositions, illustrated correspondence, and vintage photos from the rich Kurtzman archives

Denis Kitchen is a pioneering cartoonist, writer, editor, and underground comic book publisher. He represents the Kurtzman estate, and maintains the archives. In 1986 Kitchen established the nonprofit Comic Book Legal Defense Fund, and served as its president for its first eighteen years. He lives in western Massachusetts.

Paul Buhle is a senior lecturer in the American Civilization and History departments at Brown University. He has written and edited thirty-five books, including Jews and American Comics, and lives in Rhode Island.