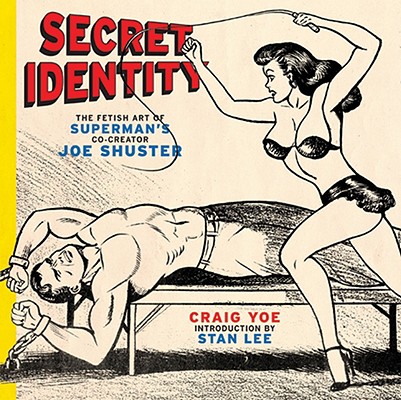 Secret Identity: The Fetish Art of Superman's Co-creator Joe Shuster showcases rare and recently discovered erotic artwork by the most seminal artist in comics, Joe Shuster. Created in the early 1950s when Shuster was down on his luck after suing his publisher, DC Comics, over the copyright for Superman, he illustrated these images for an obscure series of magazines called "Nights of Horror," published under the counter until they were banned by the U.S. Senate. Juvenile deliquency, Dr. Fredric Wertham, and the Brooklyn Thrill Killers gang all figure into this sensational story.
The discovery of this artwork reveals the "secret identity" of this revered comics creator, and is sure to generate controversy and change the perception of the way we look at Clark Kent, Lois Lane, Lex Luthor, and Jimmy Olsen forever. The book includes reproductions of these images, and an essay that provides a detailed account of the scandal and the murder trial that resulted from the publication of this racy material.
"Jeepers, Mr. Kent!"--USA Today "Eye-opening…a compelling feat of literary sleuthing."--Publishers Weekly
"A shocking expose"--National Enquirer

Secret Identity is an incredible find of historic significance to comics art….—Library Journal

Craig Yoe runs the New York design firm YOE! Studio with Clizia Gussoni, and is the author of over 30 books, including The Art of Mickey Mouse. Yoe has won the Gold Medal from the Society of Illustrators, two Addys, the Mobius, and an Eisner Award. Stan Lee is a writer, editor, and comic book creator, and the former president and chairman of Marvel Comics.
Loading...
or
Not Currently Available for Direct Purchase