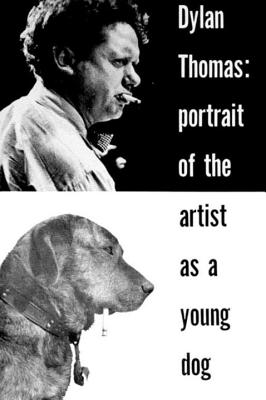 Portrait of the Artist as a Young Dog

The "Young Dog" of the title is of course Thomas himself, and this volume of autobiographical stories by the great modern poet, who died at 39 while on his third lecture tour in the United States, shows his waggish humor at its best, his exuberance and verbal magic in spectacular display. It also shows him a spinner of tales and a creator of memorable characters. There is the grandfather who marches off in his best clothes to be buried in the next town, the sardonic "senior reporter" on a provincial newspaper, servant girls who know how to deal triumphantly with a fast-talking dandy, a twenty-year-old farmer preaching wildly to boys in a deserted barn, a group of respectable worthies who play at literature behind closed blinds, and always the observant and unfazed young Thomas.

Dylan Thomas, born in Swansea in 1914, is perhaps Wales' best-known writer, widely considered to be one of the major poets of the 20th century, and many of his greatest poems, such as 'Fern Hill' and 'Do not go gentle into that good night' remain among the nation's favorites. As well as poetry, Dylan Thomas wrote numerous short stories and scripts for film and radio - none more popular than his radio play UNDER MILK WOOD (ISBN 9780811229937), which is considered by many to be his masterpiece. He led a fascinating and tempestuous life, permeated by love affairs and reckless bouts of drinking, which led him to claim that he had beast, angel and madman within him. There have been several film adaptations of his fascinating life, which ended all too soon in 1953 when he collapsed and died in New York shortly after his 39th birthday. A memorial stone commemorating his life and work was unveiled in Poets' Corner in Westminster Abbey in 1982.