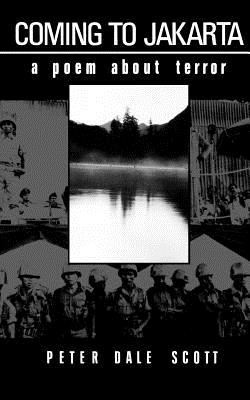 A Poem about Terror

"Not since Robert Duncan's Ground Work and before that William Carlos Williams' Paterson has New Directions published a long poem as important as Coming to Jakarta!" —James Laughlin

A devastating revelation of violence, exploitation, and corrupt politics, Coming to Jakarta derives its title from the role played by the CIA, banks, and oil companies in the 1965 slaughter of more than half a million Indonesians. A former Canadian diplomat and now a scholar at the University of California, Peter Dale Scott has said that the poem "is triggered by what we know of the bloody Indonesian massacre… However it is not so much a narrative of exotic foreign murder as one person’s account of what it is like to live in the 20th century, possessing enough access to information and power to feel guilty about global human oppression, but not enough to deal with it. The usual result is a kind of daily schizophrenia by which we desensitize ourselves to our own responses to what we read in the newspapers. The psychic self-alienation which ensues makes integrative poetry difficult but necessary." With a brilliant use of collage, placing the political against the personal––childhood acquaintances are among the darkly powerful figures––Scott works in the tradition of Pound’s Cantos, but his substance is completely his own.

Peter Dale Scott is a former Canadian diplomat and professor of English at the University of California, Berkeley. He is a poet and author who has published more than a dozen books and collections of poetry, many revolving around the self-coined concept of “deep politics.”
Loading...
or support indie stores by buying on