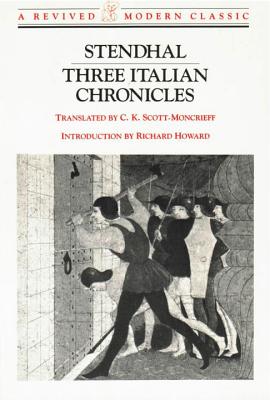 Italian passion––”the passion that seeks its own satisfaction, and not to give one’s neighbor an enhanced idea of oneself”––is the life-blood of Stendhal’s Three Italian Chronicles. Gathered here are three long-out-of-print stories animated by life-and-death romances and sensational crimes. “The Cenci” and “The Abbess of Castro,” set in a brazen Renaissance, are the author’s versions of two antique chronicles he discovered in Italian libraries: “Vanina Vanini” is a Roman tale of the 1820s. All three give full rein to that special egoism of unswerving, passionate purpose Stendhal so adored in Napoleon and celebrated in all his heroes and heroines. Fused to that passion is his style, which imperturbably stage-manages urgent speech and violent intrigue. On this gemlike scale, his style as it charms and stings seems particularly vivid: for admirers of his novels, each of these stories gleams like an enameled miniature executed by a great master.

The nature of Stendhal’s talent…was a strange mixture of opera and cerebrality. He was at his best when demonstrating a particularly subtle insight with the florid sensationalism of La Scala.

Adored by Proust, admired by Valéry, envied by Gide, Stendhal, was far too prepossessing a writer to satisfy anyone… as merely a novelist.
— Richard Howard

It was in Italy and in the the seventeenth century that a Princess said, as she sipped an ice with keen enjoyment on the evening of a hot day: ‘What a pity, this is not a sin!’
— Stendhal
or
Not Currently Available for Direct Purchase
Copyright © 2020 American Booksellers Association