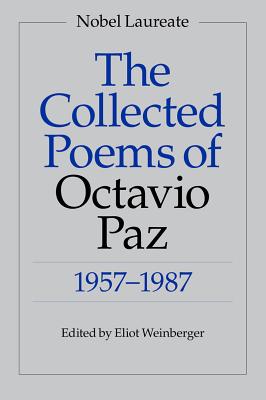 The Collected Poems of Octavio Paz

“Paz's poetry is a seismograph of our century’s turbulence, a crossroads where East meets West."—Publishers Weekly

Octavio Paz is such a masterly presence in the dialogue of Latin American culture that it is easy to forget he is first and foremost a poet. . .but a reading of this volume reveals that in the polyphony of his voices the poetic one still rings loudest and clearest.
— Roberto Gonzalez Echevarria - The New York Times Book Review

Eliot Weinberger is an essayist, editor, and translator. He lives in New York City.

Eliot Weinberger is an essayist, editor, and translator. He lives in New York City.

Elizabeth Bishop (February 8, 1911 – October 6, 1979) was an American poet and short-story writer. She was Consultant in Poetry to the Library of Congress from 1949 to 1950, the Pulitzer Prize winner for Poetry in 1956, the National Book Award winner in 1970, and the recipient of the Neustadt International Prize for Literature in 1976.

Paul Blackburn (November 24, 1926–September 13, 1971) was an American poet. He influenced contemporary literature through his poetry, translations and the encouragement and support he offered to fellow poets.

Denise Levertov (1923-1997) was a British born American poet. She wrote and published 20 books of poetry, criticism, translations. She also edited several anthologies. Among her many awards and honors, she received the Shelley Memorial Award, the Robert Frost Medal, the Lenore Marshall Prize, the Lannan Award, a grant from the National Institute of Arts and Letters, and a Guggenheim Fellowship.

Charles Tomlinson read English at Queens College, Cambridge, has lived in Northern Italy and London, and has recently retired after thirty-six years of teaching at the University of Bristol. In 1993 he received the Bennett Award for achievement in literature from The Hudson Review of New York, and in 1991 the Premio Europeo di Cittadella. He is the editor of the classic anthology The Oxford Book of Verse in English Translation. He lives in Gloucester, England.
Loading...
or support indie stores by buying on