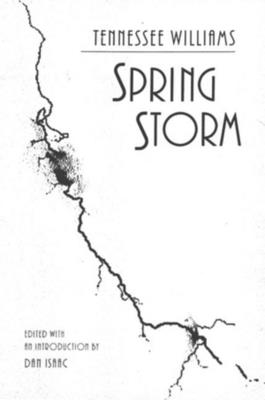 "A crucible of so many elements that would later shape and characterize Williams's work."—World Literature Today

When Tennessee Williams read Spring Storm aloud to his playwriting class at the University of Iowa in 1938, he was met with silence and embarrassment. His professor, the renowned E. C. Mabie, remarked as he got up and dismissed the seminar, "Well, we all have to paint our nudes!" Tom's earlier comment in his journal that the play "is well-constructed, no social propaganda, and is suitable for the commercial stage" seems accurate enough in 1999, but woefully naive deep in the Depression when the play's sexual explicitness—particularly its matter-of-fact acceptance of a woman's right to her own sexuality—would have been seen as not only shocking but also politically radical. Spring Storm would later be disavowed by the author as "simply a study of Sex—a blind animal urge or force (like the regenerative force of April) gripping four lives and leading them into a tangle of cruel and ugly relations."

But the solid and deft characterizations of the four young people whose lives intertwine—the sexually alive Heavenly Critchfield, her earthy lover Dick Miles, Heavenly's wealthy but tongue-tied admirer Arthur Shannon, and the repressed librarian Hertha Nielson who loves Arthur—are archetypes of characters we will meet again and again in the Williams canon. Epic in scope, a bit melodramatic in execution, tragic in outcome, Spring Storm created a wave of excitement among theatre insiders when it was given a staged reading at The Ensemble Studio Theatre's Octoberfest '96. This edition has been prepared, with an illuminating introduction, by Dan Isaac, who initiated the Octoberfest production.

Tennessee Williams (1911–1983) was America’s most influential playwright. Readers have devoured his poetry, essays, short stories, and letters, as well as his fantastic late plays, his remarkable corpus of one-acts, and his greatest plays—The Glass Menagerie, A Streetcar Named Desire, Cat on a Hot Tin Roof, The Night of the Iguana, The Rose Tattoo, Suddenly Last Summer, and Camino Real. Williams is a cornerstone of New Directions—we publish everything he wrote. He is also our single bestselling author.

Dan Isaac is a theater director and scholar.
Loading...
or
Not Currently Available for Direct Purchase