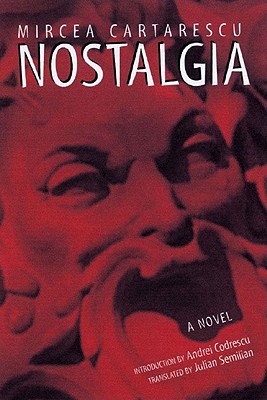 A stunning translation of one of Romania's foremost authors.

Mircea Cartarescu, born in 1956, is one of Romania's leading novelists and poets. This translation of his 1989 novel Nostalgia, writes Andrei Codrescu, "introduces to English a writer who has always had a place reserved for him in a constellation that includes the Brothers Grimm, Franz Kafka, Jorge Luis Borges, Bruno Schulz, Julio Cortazar, Gabriel Garcia Marquez, Milan Kundera, and Milorad Pavic, to mention just a few." Like most of his literary contemporaries of the avant-garde Eighties Generation, his major work has been translated into several European languages, with the notable exception, until now, of English.

Readers opening the pages of Nostalgia should brace themselves for a verbal tidal wave of the imagination that will wash away previous ideas of what a novel is or ought to be. Although each of its five chapters is separate and stands alone, a thematic, even mesmeric harmony finds itself in children's games, the music of the spheres, humankind's primordial myth-making, the origins of the universe, and in the dilapidated tenement blocks of an apocalyptic Bucharest during the years of communist dictatorship.

A wonderful labyrinth of language and color. Cartarescu, one of Romania's foremost poets and novelists, gives us a novel filled with surprises and the unexpected.
— Peter Constantine

Read this book, then read it again.
— San Francisco Chronicle

Mircea Cartarescu (b. 1956) is a Romanian author. He was recipient of the Romanian Writers Union prize in 1994 for Travesti and the Republic of Moldova prize in 1994, among many other awards. His work has been translated into English, French, Spanish, and German.

Julian Semilian is a Romanian-born poet, translator, novelist and filmmaker. He currently teaches film editing at the North Carolina School of the Arts, after a twenty-four-year career as a film editor in Hollywood. Before his translation of Cartarescu’s Nostalgia, he translated Paul Celan’s Romanian Poems (Green Integer).
Loading...
or support indie stores by buying on
(This book is on backorder)