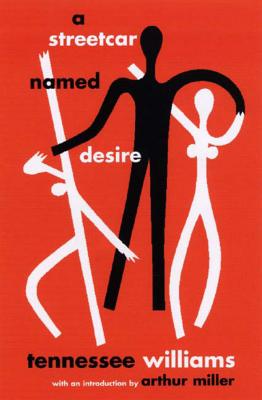 The Pulitzer Prize and Drama Critics Circle Award winning play—reissued with an introduction by Arthur Miller (Death of a Salesman and The Crucible), and Williams' essay "The World I Live In."

It is a very short list of 20th-century American plays that continue to have the same power and impact as when they first appeared—57 years after its Broadway premiere, Tennessee Williams' A Streetcar Named Desire is one of those plays. The story famously recounts how the faded and promiscuous Blanche DuBois is pushed over the edge by her sexy and brutal brother-in-law, Stanley Kowalski. Streetcar launched the careers of Marlon Brando, Jessica Tandy, Kim Hunter and Karl Malden, and solidified the position of Tennessee Williams as one of the most important young playwrights of his generation, as well as that of Elia Kazan as the greatest American stage director of the '40s and '50s.

Who better than America's elder statesman of the theater, Williams' contemporary Arthur Miller, to write as a witness to the lightning that struck American culture in the form of A Streetcar Named Desire? Miller's rich perspective on Williams' singular style of poetic dialogue, sensitive characters, and dramatic violence makes this a unique and valuable new edition of A Streetcar Named Desire. This definitive new edition will also include Williams' essay "The World I Live In," and a brief chronology of the author's life.


Praise For A Streetcar Named Desire…

In Streetcar Williams found images and rhythms that are still part of the way we think and feel and move.

Lyrical and poetic and human and heartbreaking and memorable and funny.
— Francis Ford Coppola

The introductions, by playwrights as illustrious as Williams himself, are the gem of these new editions.
— Ken Furtado - Echo Magazine

Blanche is the Everest of modern American drama, a peak of psychological complexity and emotional range.
— John Lahr - The New Yorker

Tennessee Williams (1911–1983) was America’s most influential playwright. Readers have devoured his poetry, essays, short stories, and letters, as well as his fantastic late plays, his remarkable corpus of one-acts, and his greatest plays—The Glass Menagerie, A Streetcar Named Desire, Cat on a Hot Tin Roof, The Night of the Iguana, The Rose Tattoo, Suddenly Last Summer, and Camino Real. Williams is a cornerstone of New Directions—we publish everything he wrote. He is also our single bestselling author.