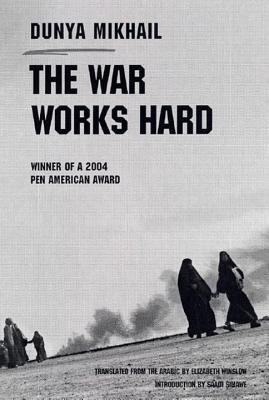 Revolutionary poetry by an exiled Iraqi woman. Winner of a 2004 PEN Translation Fund Award. "Yesterday I lost a country," Dunya Mikhail writes in The War Works Hard, a revolutionary work by an exiled Iraqi poether first to appear in English. Amidst the ongoing atrocities in Iraq, here is an important new voice that rescues the human spirit from the ruins, unmasking the official glorification of war with telegraphic lexical austerity. Embracing literary traditions from ancient Mesopotamian mythology to Biblical and Qur'anic parables to Western modernism, Mikhail's poetic vision transcends cultural and linguistic boundaries with liberating compassion.


Praise For The War Works Hard…

Here, the fierceness of the public life meshes with the hard-won tenderness of the private, in a passionate dialectic that makes her voice the inescapable voice of Arab poetry today.
— Pierre Joris

Dunya Mikhail is a woman who speaks like the disillusioned goddesses of Babylon. Blunt as well as subtle, she makes of war a distinct entity, thus turning it into a myth. To her own question, 'What does it mean to die all this death?,' her poems answer that it means to reveal the only redeeming power that we have: the existence of love.
— Etel Adnan

Dunya Mikhail was born in Baghdad, Iraq, and moved to the United States thirty years later in 1995. After graduating from the University of Baghdad, she worked as a journalist and translator for the Baghdad Observer. Facing censorship and interrogation, she left Iraq, first to Jordan and then to America, settling in Detroit. New Directions published her books The Beekeeper: Rescuing the Stolen Women of Iraq, The Iraqi Nights, Diary of A Wave Outside the Sea, and The War Works Hard—chosen as one the New York Public Library’s Books to Remember in 2005—as well as her edited volume, 15 Iraqi Poets. She has received a Guggenheim Fellowship, a Knights Foundation grant, a Kresge Fellowship, and the United Nations Human Rights Award for Freedom of Writing, and works as a special lecturer of Arabic at Oakland University in Michigan.
Loading...
or
Not Currently Available for Direct Purchase