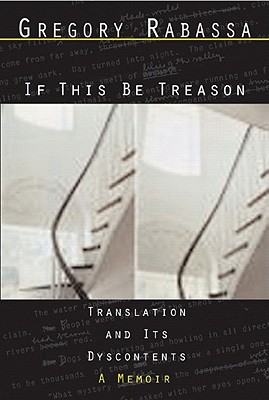 If This Be Treason

This long-awaited memoir is a joy to read, an instrumental guide to translating, and a look at the life of one of its great practitioners.

A Los Angeles Times Favorite Book of the Year for 2005.

Gregory Rabassa's influence as a translator is tremendous. His translations of Gabriel Garcia Marquez's One Hundred Years of Solitude and Julio Cortazar's Hopscotch have helped make these some of the the most widely read and respected works in world literature. (Garcia Marquez was known to say that the English translation of One Hundred Years was better than the Spanish original.) In If This Be Treason: Translation and Its Dyscontents, Rabassa offers a cool- headed and humorous defense of translation, laying out his views on the translator's art. Anecdotal and always illuminating, Rabassa traces his career from a boyhood on a New Hampshire farm, his school days "collecting" languages, the two and a half years he spent overseas during WWII, and his South American travels, until one day "I signed a contract to do my first translation of a long work [Cortazar's Hopscotch] for a commercial publisher." Additionally, Rabassa offers us his "rap sheet," a consideration of the various authors and the over 40 works he has translated. This long-awaited memoir is a joy to read, an instrumental guide to translating, and a look at the life of one of its great practitioners.

Praise For If This Be Treason: Translation and its Dyscontents…

If translators are the anonymous heroes of contemporary literature, its anonymous superhero is Gregory Rabassa.
— The New York Times Book Review

Widely considered one of the greatest practitioners of his craft.
— The New York Times

In this supple narrative, packed with erudition and yet leavened by Rabassa's mordant, often self-effacing wit, less becomes more.
— Newsweek

Excellent literary entertainment. Read these pages while sipping a Brazilian caipirinha, and you'll spend a fine and mellow evening.

An insider's view that is available nowhere else, and everyone, neophytes as well as past or present Spanish majors, can profit from it.
— The LA Times Book Review

Gregory Rabassa (1922-2016) was the recipient of multiple prizes including a lifetime achievement award from the PEN American Center for contributions to Hispanic literature and a National Medal of Arts. He was the translator of One Hundred Years of Solitude, among other classic works.
Loading...
or support indie stores by buying on