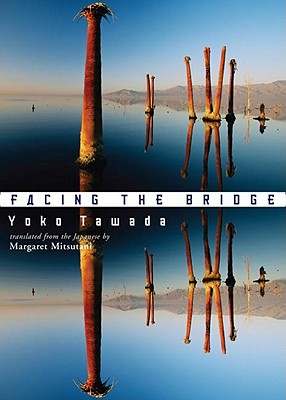 From Japan to Vietnam to Amsterdam to the Canary Islands, these three new tales by master storyteller Yoko Tawada float between cultures, identities, and the dreamwork of the imagination

Amo, an African kidnapped to Europe as a boy, and Tamao, a Japanese exchange student in Germany, live in different countries but are being followed by the same shadow...Kazuko, a young professional tourist, is lured to Vietnam by a mysterious postcard...On the Canary Islands, a nameless translator battles a banana grove and a series of Saint Georges...

These three new tales by master storyteller Yoko Tawada cross cultures and histories with a sensuous playfulness as sweet as a box of candied hearts—even Michael Jackson makes an appearance. In Facing the Bridge, Tawada's second collection of stories with New Directions, obsession becomes delight as the reader is whisked into a world where identities flicker and shift in a never-ending balance.

Yoko Tawada writes in both Japanese and German and has received the Akutagawa, Lessing, Noma, Adelbert von Chamisso and Tanizaki prizes. Last year her novel The Emissary won the National Book Award.

Praise For Facing the Bridge…

...in the title of this volume [Tawada] chooses to face the bridge, to stare it down, perhaps, refusing to cross. Through her writing she seeks to create a new kind of bridge—not as a structure built of stone or concrete, but as a physical process, a continuing dance.
— Margaret Mitsutani

In Tawada's work, one has the feeling of having wandered into a mythology that is not one's own.
— Rivka Galchen
or support indie stores by buying on
(This book is on backorder)
Copyright © 2020 American Booksellers Association