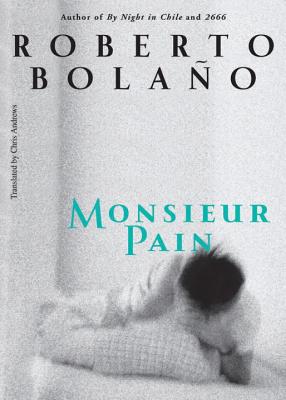 Paris, 1938. The Peruvian poet César Vallejo is in the hospital, afflicted with an undiagnosed illness, and unable to stop hiccuping. His wife calls on an acquaintance of her friend Madame Reynaud: the Mesmerist Pierre Pain. Pain, a timid bachelor, is in love with the widow Reynaud, and agrees to help. But two mysterious Spanish men follow Pain and bribe him not to treat Vallejo, and Pain takes the money. Ravaged by guilt and anxiety, however, he does not intend to abandon his new patient, but then Pain’s access to the hospital is barred and Madame Reynaud leaves Paris…. Another practioner of the occult sciences enters the story (working for Franco, using his Mesmeric expertise to interrogate prisoners)—as do Mme. Curie, tarot cards, an assassination, and nightmares. Meanwhile, Monsieur Pain, haunted and guilty, wanders the crepuscular, rainy streets of Paris...

Roberto Bolaño was an examplary literary rebel. To drag fiction toward
the unknown, he had to go there himself, and there invent a method with
which to represent it. Since the unknown place was reality, the results
are multi-dimensional.
— Sarah Kerr - The New York Review of Books

Bolaño wrote with the high-voltage first-person braininess of a Saul Bellow and an extreme subversive vision of his own.
— Francisco Goldman - The New York Times Magazine

Monsieur Pain, an early novella, beautifully translated by Chris Andrews, joins his other works in all their aching splendour.

A real discovery and a substantial addition to the growing Bolaño library in English.
— Stephen Henighan - The Quarterly Conversation

Chris Andrews was born in Newcastle, Australia, in 1962. He studied at the University of Melbourne and taught there, in the French program, from 1995 to 2008. He also taught at the University of Western Sydney, where he was a member of the Writing and Society Research Center. As well as translating nine books by Roberto Bolano and ten books (and counting) by César Aira, he also brought the French author Kaouther Adimi’s Our Riches into English for New Directions. Andrews has won the Valle-Inclán Prize and the French-American Foundation Translation Prize for his translations. Additionally, he has published the critical studies Poetry and Cosmogony: Science in the Writing of Queneau and Ponge and Roberto Bolano's Fiction: An Expanding Universe as well as two collections of poems, Cut Lunch and Lime Green Chair, for which he won the Anthony Hecht Poetry Prize.
Loading...
or
Not Currently Available for Direct Purchase