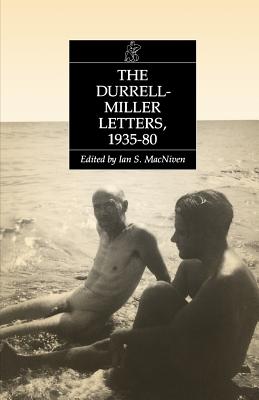 In 1935 a young Englishman living on Corfu wrote enthusiastically to a middle-aged Brooklynite who had just published a succes de scandale in Paris: “…Tropic [of Cancer] turns the corner into a new life which has regained its bowels.” Henry Miller, realizing that in Lawrence Durrell he had hooked his ideal reader, responded: “You’re the first Britisher who’s written me an intelligent letter about the book.” Thus began a correspondence that ended only with Miller’s death in 1980—nearly 1,000,000 words later. The Durrell-Miller Letters, 1935-80 contains an extensive and representative selection of the total correspondence. Almost half of the present volume has never been published before, including some recently recovered “lost” letters; in addition, many passages expurgated from letters published in 1963 have been restored. Editor Ian S. MacNiven of the State University of New York, Maritime College, is quite right to regard the Durrell-Miller correspondence as a dual biography of the creative lives of two of this century’s great literary iconoclasts, a biography “At once as serious as Schopenhauer and as winning as wine.”

Lawrence Durrell is best known for The Alexandria Quartet.

Henry Miller (1891—1980) was one of the most controversial American novelists during his lifetime. His book, The Tropic of Cancer, was banned in the some U.S. states before being overruled by the Supreme Court. New Directions publishes several of his books.

Energy, high spirits, tender regard spill from these letters: and for a remarkably long time.
or
Buy Here
Copyright © 2020 American Booksellers Association