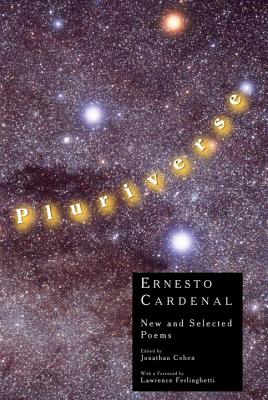 The most comprehensive selection of poems in English by Latin America’s legendary poet-activist, Ernesto Cardenal.

We were helped along, not to say spurred along, by the poetry of Ernesto Cardenal.
— Roberto Bolaño

Cardenal shows his rarest talent—the ability to love and be angry in one perfectly formed phrase.
— George Wallace

Readers of English, thank your gods: the breadth of Ernesto Cardenal’s amazing poetic career is now available for your consumption thanks to New Directions and the recently published Pluriverse. Spanning fifty-six years, the book presents Cardenal in all his guises: revolutionary, spiritualist, chronicler of man’s inhumanity to man, chilling visionary, and cosmic quasi-historian. The poems in this collection are often long, deceptively assessable, and quite dazzling.
— Vincent Francone

Highly recommended for all libraries and could be used as a text for courses in multicultural and ethnic studies.
— Alva V. Cellini

A worthy tribute to this living legend. The diversity of the work serves to enhance the overall experience.
— Joseph D. Haske

When Father Cardenal focuses upon Nicaragua as a land and a people, the detailed pictures he paints express passionate devotion.
— David Gibson

Ernesto Cardenal was born in 1925 in Granada, Nicaragua. Revolutionary activist, disciple of Thomas Merton, Roman Catholic priest, founder of the contemplative commune Our Lady of Solentiname, ambassador for the Sandinistas, Minister of Culture in post-Somoza Nicaragua, and co-founder of the international cultural center House of Three Worlds, Cardenal, on his eightieth birthday, was given the nation's highest cultural honor, the Order of Rubén Darío, by President Enrique Bolanos in 2005. His work has been translated into more than twenty languages.


Jonathan Cohen is the editor and compiler of William Carlos Williams’ By Word of Mouth: Poems from the Spanish,1916–1959 and editor and translator of Ernesto Cardenal’s Pluriverse: New and Selected Poems, both published recently by New Directions.

In 1953 Lawrence Ferlinghetti cofounded City Lights, the first paperback bookstore in the United States, a Mecca for millions. His Coney Island of the Mind is one of the best-selling volumes of poetry by any living American poet. Born in Yonkers, New York, in 1919, Ferlinghetti has received the Robert Frost Memorial Medal and the first Literarian Award of the National Book Foundation.
or support indie stores by buying on
(This book is on backorder)