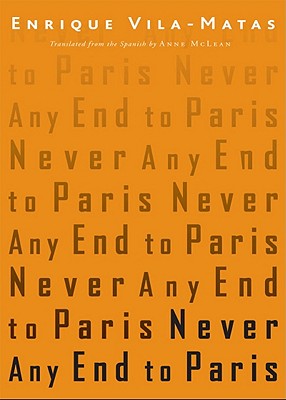 Never Any End to Paris (Paperback)

A splendid ironic portrayal of literary Paris and of a young writer’s struggles by one of Spain’s most eminent authors.

This brilliantly ironic novel about literature and writing, in Vila-Matas’s trademark witty and erudite style, is told in the form of a lecture delivered by a novelist clearly a version of the author himself. The “lecturer” tells of his two-year stint living in Marguerite Duras’s garret during the seventies, spending time with writers, intellectuals, and eccentrics, and trying to make it as a creator of literature: “I went to Paris and was very poor and very unhappy.” Encountering such luminaries as Duras, Roland Barthes, Georges Perec, Sergio Pitol, Samuel Beckett, and Juan Marsé, our narrator embarks on a novel whose text will “kill” its readers and put him on a footing with his beloved Hemingway. (Never Any End to Paris takes its title from a refrain in A Moveable Feast.) What emerges is a fabulous portrait of intellectual life in Paris that, with humor and penetrating insight, investigates the role of literature in our lives.

ENRIQUE VILA-MATAS was born in Barcelona. He has received countless prizes and written numerous award-winning novels, including Bartleby & Co., Montano’s Malady, Never Any End to Paris, and Dublinesque.

Praise For Never Any End to Paris…

Mr. Vila-Matas shows that the reasons for (and the consequences of)
not writing fiction can, in a funny way, be almost as rich and complicated
as fiction itself.

Vila-Matas’s touch is light and whimsical, while his allusions encompass
a rogue’s gallery of world literature.

I’m reading Vila-Matas’s book like a novel, a very good novel in which
the narrator gives us exhaustive information about the protagonist who
happens to be himself. I don’t know him personally, nor am I planning to
meet him, I prefer to read him and let his literature pervade me.
— Pedro Almodóvar