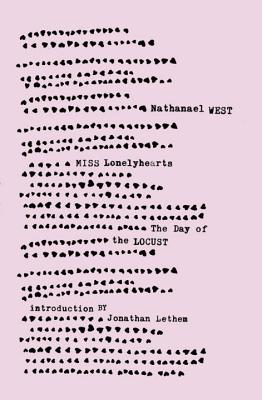 Miss Lonelyhearts & The Day of the Locust

"A primer for Big Bad City disillusionment, unsparing in its portrayal of New York's debilitating entropy."—The Village Voice. With a new introduction by Jonathan Lethem.

First published in 1933, Miss Lonelyhearts remains one of the most shocking works of 20th century American literature, as unnerving as a glob of black bile vomited up at a church social: empty, blasphemous, and horrific. Set in New York during the Depression and probably West's most powerful work, Miss Lonelyhearts concerns a nameless man assigned to produce a newspaper advice column — but as time passes he begins to break under the endless misery of those who write in, begging him for advice. Unable to find answers, and with his shaky Christianity ridiculed to razor-edged shards by his poisonous editor, he tumbles into alcoholism and a madness fueled by his own spiritual emptiness.

During his years in Hollywood West wrote The Day of the Locust, a study of the fragility of illusion. Many critics consider it with F. Scott Fitzgerald's unfinished masterpiece The Last Tycoon (1941) among the best novels written about Hollywood. Set in Hollywood during the Depression, the narrator, Tod Hackett, comes to California in the hope of a career as a painter for movie backdrops but soon joins the disenchanted second-rate actors, technicians, laborers and other characters living on the fringes of the movie industry. Tod tries to seduce Faye Greener; she is seventeen. Her protector is an old man named Homer Simpson. Tod finds work on a film called prophetically “The Burning of Los Angeles,” and the dark comic tale ends in an apocalyptic mob riot outside a Hollywood premiere, as the system runs out of control.


Praise For Miss Lonelyhearts & The Day of the Locust…

In dark times, Miss Lonelyhearts shines the brightest light in the blackest places. For this reason West’s novel has never felt more alive than today.

In 1940, when an automobile accident prematurely claimed Nathanael West's life, he was a relatively obscure writer, the author of only four short novels. West's reputation has grown considerably since then and he is now considered one of the 20th century's major authors. Born in New York, West worked as the night manager of the Kenmore Hotel on East 23rd Street in Manhattan, as a contract scriptwriter for Columbia Pictures in Hollywood, and as a screenwriter for RKO Radio Picture.

Jonathan Lethem is the author of six novels, including the bestsellers The Fortress of Solitude and Motherless Brooklyn, which won the National Book Critics Circle Award. He lives in Brooklyn and Maine.
Loading...
or support indie stores by buying on