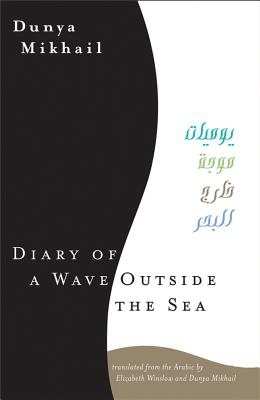 Diary of a Wave Outside the Sea

An impressionistic memoir by the award-winning Iraqi-American writer, Dunya Mikhail, Diary of a Wave Outside the Sea covers her earliest sensations of childhood to a more complicated grasp of death, beginning with the death of her father to the Gulf War and the subsequent Iraqi War.

Mikhail writes: “Death always looks for us. It comes from beyond the continents. It crosses long distances holding a basket of fire in its hand.”

The two halves of Mikhail's book merge past and present in a lyrical memoir that moves between memories of her childhood, her father's death, her Iraqi poet-peers and friends, her job as a journalist for the Baghdad Observer, and culminates with the birth of her daughter Larsa.


Praise For Diary of a Wave Outside the Sea…

A special treat — Mikhail  preserve[s] the vitality of her nurturing milieu [with] the strength to … endure in a new world.
— David Varno - The Brooklyn Rail

Dunya Mikhail was born in Baghdad, Iraq, and moved to the United States thirty years later in 1995. After graduating from the University of Baghdad, she worked as a journalist and translator for the Baghdad Observer. Facing censorship and interrogation, she left Iraq, first to Jordan and then to America, settling in Detroit. New Directions published her books The Beekeeper: Rescuing the Stolen Women of Iraq, The Iraqi Nights, Diary of A Wave Outside the Sea, and The War Works Hard—chosen as one the New York Public Library’s Books to Remember in 2005—as well as her edited volume, 15 Iraqi Poets. She has received a Guggenheim Fellowship, a Knights Foundation grant, a Kresge Fellowship, and the United Nations Human Rights Award for Freedom of Writing, and works as a special lecturer of Arabic at Oakland University in Michigan.
Loading...
or support indie stores by buying on
(This book is on backorder)